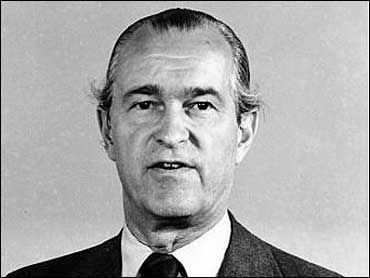 Richard Helms, the spymaster who led the CIA through some of its most difficult years and was later fired by President Nixon when he refused to block an FBI probe into the Watergate scandal, is dead. He was 89.

Helms, a long-distance runner and enthusiastic tennis player, died Tuesday night at his home, the CIA said Wednesday. No immediate cause of death was given.

Helms was the quintessential CIA man, an efficient bureaucrat who faded easily into the background.

The tall and lean Helms was no dashing, swashbuckling spook, but rather an elusive, laconic and reserved man who willingly took marching orders from whomever occupied the Oval Office. He was a master of playing by the rules of the game as he understood them at the time.

"The United States has lost a great patriot," CIA Director George J. Tenet in a statement. "The men and women of American intelligence have lost a great teacher and a true friend."

"To the very end of his life, Ambassador Helms shared his time and wisdom with those who followed him in the calling of intelligence in defense of liberty," Tenet said. "His enthusiasm for this vital work, and his concern for those who conducted it, never faltered."

After a brief stint in journalism - his early ambition had been to one day own a newspaper - Helms began his spying career during World War II with the Office of Strategic Services. He was well entrenched in America's nascent spy establishment when the OSS became the Central Intelligence Agency and he served in the agency's highest ranks from the start.

He had a remarkable career in spying's murky underworld, believed deeply in the CIA's mission and was one of its biggest boosters.

"Let's face it," he once said, "the American people want an effective, strong intelligence operation. They just don't want to hear too much about it."

Helms rose steadily through the ranks and in 1965 became deputy director. In June 1966, President Lyndon B. Johnson nominated him to become CIA director. He was the first career spy to head the agency.

By the time he took over, however, many Americans were growing skeptical of their government and "intelligence" was beginning to take on a dark connotation, something that Helms, who with his Cold War mindset, seemed to never fully understand.

But Helms had himself played a critical role in many of the CIA's most controversial and troubling operations, from plotting the assassinations of foreign leaders such as Fidel Castro to overthrowing the Marxist government of Chilean President Salvador Allende Gossens.

After studiously living most of his life out of the public eye, Helms would come to see his name linked to many of his agency's most nefarious abuses, embarrassments and illegal activities.

First for Johnson and later under President Richard Nixon, Helms headed Operation Chaos, which spied on, poked into and disrupted the private lives of U.S. citizens as the CIA improperly investigated whether the increasingly energetic and powerful anti-Vietnam War movement had links to foreign countries.

Under Nixon, the CIA's role in domestic spying hovered on the extreme edge of the agency's charter and at times crossed over into activities that were clearly illegal, author Thomas Powers wrote in his authoritative 1979 book about Helms, "The Man Who Kept the Secrets."

Nixon's purpose was clear, Powers said: "He wanted to know what his domestic opponents were up to so that he might anticipate, harass, frustrate, and discredit them."

And it wasn't long before Helms found the CIA sucked into the Watergate abyss.

The bumbling burglars who broke into the Democratic Party's offices had worked for his agency. Then Nixon tried to enlist Helms' help in blocking the FBI's investigation. When he refused to cooperate, Nixon gave the veteran spy the boot and sent Helms packing to Tehran where he served as ambassador to Iran.

Over the next few years, however, Helms was repeatedly called back to Washington to testify before congressional committees investigating the CIA's assassination schemes, its role in Chile and its spy operations within the United States, something the agency's charter barred it from doing.

By the mid-1970s it had become clear that Helms had intentionally misled Senate committees investigating the agency. In 1976, with the Justice Department probing his CIA tenure, he quit his ambassadorship.

Helms defended his testimony by maintaining that his mission was to protect intelligence secrets and that he'd not been obliged to tell the truth to Senate committees that held no CIA oversight power.

"I felt obliged to keep some of this stuff, in other words, not volunteer a good deal of information," Helms told the Senate Foreign Relations Committee in 1975.

Federal prosecutors refused to buy into Helms' explanation and announced a year later they would seek to indict him for perjury.

Helms responded aggressively, saying he was prepared to play hardball, go to trial and publicly revel matters the government wanted to remain untold.

The Justice Department took Helms' bluff seriously and backed down.

In the end, prosecutors offered Helms a plea bargain in which he pleaded no contest to charges he'd failed to answer the Senate's questions "fully, completely and accurately." He paid a $2,000 fine and received a suspended two-year prison sentence.

Helms considered the criminal conviction a "badge of honor."

"I don't feel disgraced at all," he told reporters gathered on the courthouse steps after his plea. "I think if I had done anything else I would have been disgraced."

Richard McGarrah Helms was born March 30, 1913, in St. Davids, Pa., into a family of some means. His father was a corporate executive and his maternal grandfather, Gates McGarrah, was a leading international banker.

Helms grew up in South Orange, N.J., and spent two of his high school years in Europe, leaning French, German and the social graces.

He graduated Phi Beta Kappa from Williams College in 1935, where he served as the editor of the school newspaper and yearbook. He was voted "most likely to succeed" and "most respected."

Out of college, he returned to Europe as a cub reporter for United Press and gained some notice for his exclusive interview with Adolf Hitler.

By 1937 he was back in the states and working as the national advertising manager for The Indianapolis Times, a now-defunct newspaper.

During the Second World War, he was assigned to the OSS, because of his knowledge of foreign languages and remained with the intelligence service, which became the CIA in 1947.