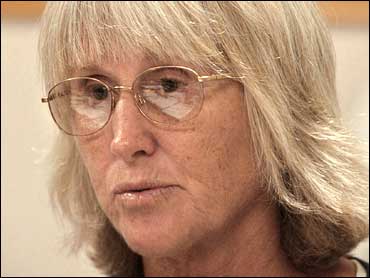 Sara Jane Olson, a 1970s radical who assumed a new identity as a Minnesota housewife and spent a quarter century as a fugitive, was released from a California state corrections facility today.

Spokeswoman Terry Thornton said Olson was released early Tuesday from the Central California Women's Facility in Chowchilla, in the heart of the state's farm country about 150 miles southeast of San Francisco.

Olson will be paroled to Minnesota, where she had been living as a fugitive until her arrest in 1999.

Olson has served seven years - half her sentence - since pleading guilty to placing pipe bombs under Los Angeles Police Department patrol cars and participating in the deadly robbery of a bank in a Sacramento suburb.

She was released by mistake a year ago after California corrections officials miscalculated her parole date, joining her family for five days before she was re-arrested. Authorities now say she has served the proper seven-year sentence.

One of her attorneys, David Nickerson, said his client is likely to head to her mother's home in Palmdale after she is freed and check in with her parole agent in Los Angeles County.

She then will be allowed to fly home with her husband, Dr. Gerald "Fred" Peterson, to St. Paul, Minnesota.

Critics have been urging Gov. Arnold Schwarzenegger to have Olson serve her time in California. They include Minnesota Gov. Tim Pawlenty and police protective leagues in Los Angeles and Minnesota, which say Olson should finish her parole where her crimes were committed.

On Monday, California state Sen. Jeff Denham invoked the bank robbery in a letter to Schwarzenegger asking that Olson not be allowed to return to her adopted state.

In the 1975 robbery of Crocker National Bank near Sacramento, Myrna Opsahl, a 42-year-old mother of four who was trying to deposit a church collection, was killed by a shotgun blast.

"She fled the state, changed her name, and lived a leisurely life of lies and deception in Minnesota, while the children of Myrna Opsahl were forced to grow up without a mother," Denham said in his letter.

Nickerson, an Olson attorney, noted that corrections officials in Minnesota have said Olson can serve her parole there if California officials decide to send her home.

"Everyone she knows is in Minnesota. The statute says she's to be paroled to the place where she has the best chance to succeed. That's where her family, friends and home are. She's served her time, she's paid her debt. Now they want to punish her some more. This is just being vindictive."

Schwarzenegger deferred to the corrections department.

"We kind of let them continue taking care of those issues and they will find the right solutions for the problem," he said Monday.

Olson, 62, will now return to the type of comfortable, middle class lifestyle she once denounced as a member of the Symbionese Liberation Army, settling into her St. Paul neighborhood among lawyers, doctors and professors.

In Minnesota, Olson developed an identity that was worlds apart from her California past. She volunteered in social causes and acted in community theater while raising the couple's three daughters. The Olson home was a frequent site of dinner parties.

Her past resurfaced in 1999, when she was arrested while driving a minivan after she was profiled on the television show "America's Most Wanted."

In a sign of those turbulent times, the group adopted a seven-headed snake as its symbol and the slogan, "Death to the fascist insect that preys upon the life of the people."

All but one other former SLA member have been released from prison after pleading guilty in 2002 to taking part in the Sacramento bank robbery.

"We were young and foolish. We felt we were committing an idealized, ideological action to obtain government-insured money and that we were not stealing from ordinary people," Olson wrote in an apology before her sentencing for the bank robbery. "In the end, we stole someone's life."