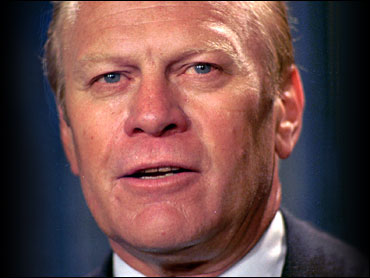 Gerald Ford was an athlete in his youth, took care of himself all his life and was in great shape when he came to the White House.

Yet, after he took a tumble or two on the ski slopes and then slipped one rainy day and fell headlong down the stairs coming off Air Force One, he developed the reputation for clumsiness. The joke was Vice President Rockefeller was just a banana peel from the presidency.

It was completely unfair but partly my fault, because I wrote a lot of those stories, but as someone said, "What are you gonna do, if the president takes a header? Keep it a secret?"

The stories were great sight gags, but during the 1976 campaign I learned the hard way that the gods have a way of getting even with those who tell the same joke too many times.

When Mr. Ford stumbled, missed the door and bumped his head after a speech from the rear platform of a train in Kalamazoo, Mich., I filed the obligatory story.

I thought it was hilarious but afterward, as I rushed to catch a plane for the next campaign stop, it didn't seem quite so funny. As I was boarding the plane someone hollered at me and, momentarily distracted, I walked head-on into the overhead luggage rack, brained myself and for an instant saw stars and passed out.

I wasn't really hurt but the next time I saw the president, it seemed only fair to tell him about it. He laughed out loud and said, "By God, I just wish I could have been there to see it."

I think he meant it, too.