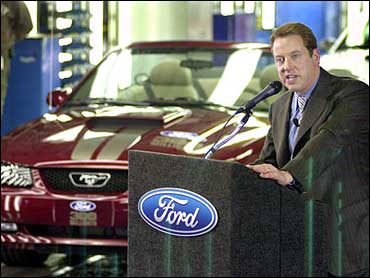 The Ford Motor Co. has produced its 300 millionth vehicle - a crimson red 2004 Mustang GT convertible driven off the assembly line by none other than chairman Bill Ford Jr.

"It's no secret to any of you that this is my favorite car in the world," Ford told employees during a ceremony Tuesday at the company's Dearborn Assembly Plant.

The world's second-largest automaker will use the milestone Mustang in promotions as it celebrates the 40th anniversary of that model next year. Ford marked 100 years in business in June.

"When the company built its one millionth car, my great-grandfather Henry Ford said, 'A million of anything is a great many,"' Bill Ford said. "He would be very proud that his company produced 300 million vehicles."

General Motors Corp., the world's largest automaker, says it has built roughly 395 million vehicles worldwide since its founding in 1908.

Ford is trying to engineer a turnaround at the world's second-largest automaker. Through October, Ford's U.S. sales were down 4.7 percent from the same period last year.