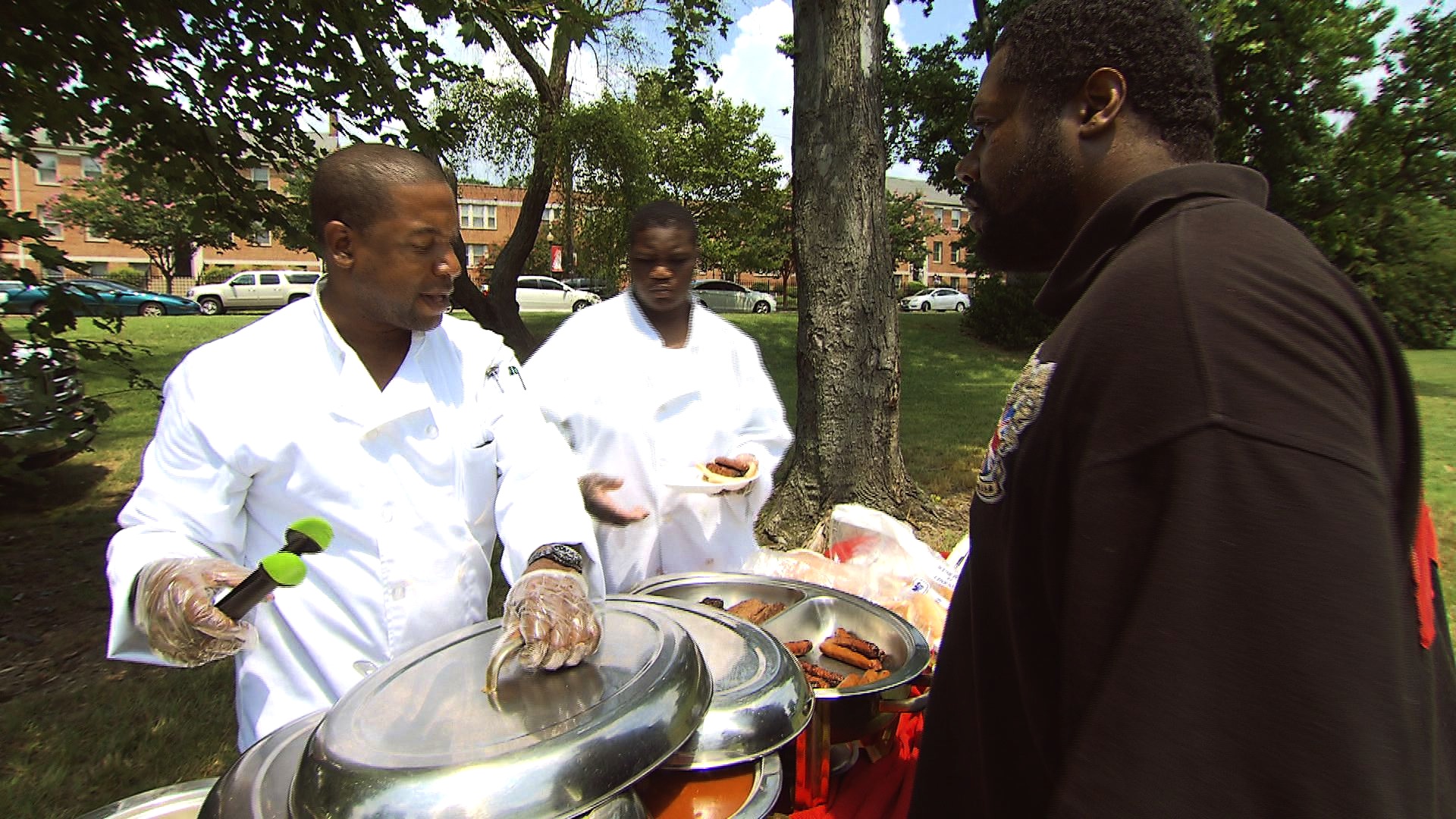 Chef Furard Tate's mission in the kitchen is more than just plating soul food -- he wants the young men and women smoking the meat and cooking the mac-and-cheese to leave his restaurant with the skills to succeed on their own.

"I don't know about you, but barbecue is something that makes you smile," Tate told CBS News. "You can't eat a rib or a piece of barbecue chicken without opening up your mouth and smiling. It brings people together. So I brought kids to an industry of service. You gotta give back."

Tate has been able to employ as many as 100 veterans, as well as at risk young men and women, teaching them how to cook mouthwatering menu items like sweet corn muffins, pulled pork platters and Angus beef brisket.

Rashaid Anderson, a onetime trainee and former Army private, says Inspire BBQ offered him a roadmap from unemployment to self-sufficiency. Tate provided Anderson not only with an education on food, but with the skills to apply for a job, craft a resume, and succeed in an interview with employers. Most importantly, Tate offers his trainees confidence and a community - a safety net of sorts.

"In D.C., the food industry service is growing, and he just let us know that we could be a part of it, and he told us that we had to work hard," Anderson says of Tate. "That we had to be accountable for ourselves and we just had to make sure that we were doing the things we wanted to do in order to make ourselves grow."

Today, Anderson works at Steel Plate, a hip new restaurant in Northeast D.C. It's a job he secured thanks to Tate's relationship with the head chef, who also employs another Inspire BBQ graduate at another restaurant.

Anderson is making the most of a life-changing opportunity, promoted from making salads to assistant to the head chef in just one week. He credits his success to Chef Tate, whose infectious and relentless positive attitude is an inspiration to those trying to get back on their feet.

According to Anderson, the backbone of Tate's training philosophy is "purpose."

"The number one thing we worked on is purpose," Anderson says. "Finding out what your purpose is, finding out the weaknesses that you have. It usually always breaks down to helping yourself, so you can help others."

But after 11 years of helping others, Inspire BBQ no longer has a home to host its job training program, not to mention ribs or collard greens. It was pushed out of its space in Washington's rapidly-gentrifying H Street Corridor by a $4.5 million dollar real estate deal.

"The doors are closed and the building's about to be knocked down. It was a kick in the gut," Tate explains.

Inspire BBQ's old block was once known for burned-out buildings left behind after fiery riots sparked by Martin Luther King Jr.'s assassination. These days, it's preparing for a 36,000 square-foot Whole Foods. Tate is now a bystander in a community that he helped transform into the hottest neighborhood in the city -- a place that is rapidly pricing out its longtime residents.

"We want these businesses to know that they should be responsible for the communities where they do business," Tate told CBS News. "And responsibility is not just hiring people and giving them fair wages, it's to continue to find ways to help develop the community so that the community grows itself."

Tate, however, isn't giving up on his community, or his food. For now, he is keeping Inspire BBQ alive with catering gigs and training sessions in different church spaces and school kitchens. Most recently, Tate signed a contract with the U.S. Veterans Association to provide food and training in their new housing facility in southeast Washington.

For a man who dedicated the last decade of his life to helping others, Tate knows that now more than ever, there a need for employment in the city's fast-changing neighborhoods.

As Anderson sees it, Inspire BBQ's fate may be uncertain. But the hope it offers is not.

"I understand that the area is changing and growing, and that's progress you might say, but we also have to make sure we keep programs like Tate's available for people who need a little extra help who possible have gone the wrong way in life in order to be turned around and put on the right path," Anderson said.

"I understand that progress needs to happen, you know, like in Northeast," he says. "But it's also very important that we are able to provide for other people who need help, so they can give back and be a part of society and be a party of the solution instead of being a part of the problem."