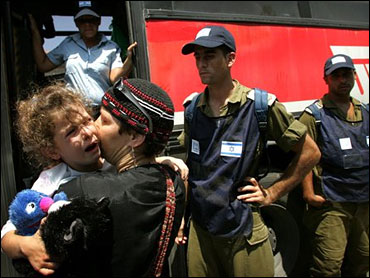 Jewish settlers sobbed and screamed, some of them ripping their shirts in mourning, as Israeli troops dragged them from homes and synagogues Wednesday, the beginning of the end of Israel's 38-year occupation of the Gaza Strip.

In the West Bank, a settler killed four Palestinian laborers in a shooting rampage, which Israeli Prime Minister Ariel Sharon denounced as a twisted act of "Jewish terror" designed to stop the historic pullout.

Despite the escalation of Israeli-Palestinian tensions, the eviction of die-hard settlers and their nationalist supporters who flooded into Gaza in recent weeks moved forward with anguish, anger and tears, but more swiftly and smoothly than anyone anticipated.

Some 14,000 unarmed Israeli soldiers and police entered six settlements throughout Wednesday, forcibly evicting residents who refused to leave voluntarily. According to the army, 1,842 people were evacuated Wednesday. Of 1,600 families in Gaza's 21 settlements, only 600 remained by the end of the day.

Sharon proposed his "disengagement plan" two years ago to ease Israel's security burden and help preserve the country's Jewish character by placing Gaza's 1.3 million Palestinians outside Israeli boundaries. Under the plan, Israel will remove all 21 settlements from Gaza and four from the West Bank, the first time it has removed veteran settlements from either area.

By evening, five of the six settlements that troops entered in the morning were cleared, with resisters remaining only in Neve Dekalim, for months the epicenter of resistance. Morag, Bedolah, Ganei Tal, Tel Katifa and Kerem Atzmona were deserted.

Most of the demonstrators weren't even from the settlements, reports CBS News Correspondent David Hawkins. They're hardliners from inside Israel or settlers from the West Bank who illegally snuck into the Gaza Strip to disrupt the disengagement.

Soldiers and settlers clashed, argued and hugged, reflecting intense and mixed emotions at the uprooting of settlers whose government years ago encouraged them to move to Gaza for the sake of Israel's security.

Hawkins adds that some settlers begged soldiers to disobey orders and leave them alone. Others were enraged that the army that is meant to protect them has come to remove them.

"It's impossible to watch this ... without tears in the eyes," Sharon said, but he insisted the pullout would make Israel safer.

In general, however, the evictions were peaceful. While settlers routinely carry weapons, they displayed none when the columns of soldiers and police marched into their communities.

Terje Roed-Larsen, who spent 12 years trying to resolve the Israeli-Palestinian conflict on behalf of the United Nations, praised Sharon for keeping the promise he made nearly two years ago.

"However, if this is the first step and the last step, I'm afraid that within months we will be back into a situation where violence and terrorism will prevail again and the living conditions of the citizens of Gaza will continue to deteriorate," Roed-Larsen, who stepped down in December as the U.N.'s top Mideast envoy, warned in an interview.

The day's worst act of protest was the self-immolation of a 54-year-old woman from the West Bank at a police roadblock in southern Israel. She suffered life-threatening burns on 70 percent of her body, police and hospital officials said.

In Neve Dekalim, a man stood before a line of soldiers and held up his daughter, about 10 years old. "Here. Take her. Expel her. Please take her, you are such a hero," he said, pouring scorn on the troops. The little girl, crying, looked up at the policeman and her father in sad confusion.

Palestinian militants said they would not retaliate for the West Bank shooting. Still, a mortar shell fell near Israeli soldiers in Gaza, without causing casualties, and Palestinian youngsters threw stones at an Israeli tank outside Neve Dekalim, Gaza's largest Jewish settlement. The tank crew responded with tear gas and fired shells into the sand.

Also, Israeli troops found a 22-pound explosives belt hidden in a water tank during a raid on the Palestinian town of Mawasi, near a Gaza settlement. Four Palestinians, allegedly members of the Islamic Jihad militant group, were arrested, the army said.

Palestinian militants are portraying the pullout as a victory for their suicide bombings and rocket attacks. Some fear militants will resume bloodshed once Israel's Gaza withdrawal is complete.

Israelis and Palestinians have been cooperating to prevent militant violence during the pullout, though lately Jewish extremists have caused the most concern. Wednesday's attack was the second on Palestinians by Israelis in two weeks. On Aug. 4, a 19-year-old Israeli deserter opened fire on a bus, killing four Israeli Arabs.

Sharon denounced the West Bank shooting as "an act of Jewish terror against innocent Palestinians out of twisted thinking, aimed at stopping the disengagement." Still, the prime minister was unlikely to allow the incident to derail the pullout, an operation on which he has staked his political career.

The gunman, identified as Asher Weisgan, 40, from the West Bank settlement of Shvut Rahel, was a driver who transported Palestinian laborers to the industrial zone of the nearby settlement of Shilo every day. At the end of the work day, he picked up the workers and briefly stopped at a security post.

He got out of his car, seized the weapon from the guard at knifepoint and fired from close range on two workers in his vehicle. He kept shooting, killing a third worker and wounding two others outside the car. One of them died later.