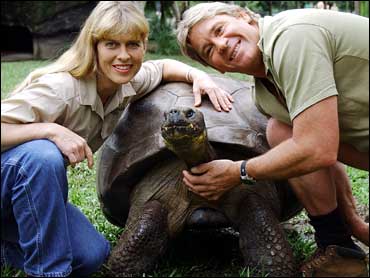 She was never in a hurry. She always took life at a gentle pace and slept well – sometimes for months at a time. She managed to adapt to the extraordinary events that unfolded around her. The English Industrial Revolution, the Coronation of the Great Queen Victoria, World Wars, men on the moon, two Presidents called Bush, the high points and low points of almost two whole centuries on this planet.

She knew Charles Darwin, the great English explorer and evolutionary theorist. Well that is to say Charles Darwin knew her. They were introduced, somewhere in South America, and came home together to London. Thereafter she traveled widely, never gave interviews and developed the reputation of an extraordinary survivor.

Harriet was her name. If only she'd been round long enough to give Mr. P the benefit of her advice.

Mr. P has never seen the world and never will. He lives in an old oak tree near the pretty village of Brierley in the west of England. Between now and the end of August he is at great risk. Every day in mortal danger. Sometimes every night. This is a sad, almost Shakespearean tragedy of love's labours lost.

Mr. P is a peacock with a problem. His annual pursuit of marital bliss always leads the same hopeless way. A colorful creature with passionate desires whose wooing knows no bounds - but is never reciprocated. Every morning a strange sound awakes him. There is rustling in the forest.

From his roost Mr. P flutters to earth and takes to the road. He goes the same way at the same time towards the same target. It is bright red with white stripes. It makes a curious excited clicking noise. To Mr. P it is the real thing. He weaves in and out of traffic on the turnpike, displays his plumage, and listens.

What he thinks he hears are the enticing sounds of a pea-hen -- a pea-hen who is anxious to meet him. What he actually hears is a totally celibate electrically operated fuel pump. Mr. P has fallen head over heels in love -- with a gas station.

Harriet the tortoise, as far as we know, never allowed her emotions to interfere with the business of simply staying alive. That's why she lived to the grand old age of 176. Mr. P is only eight. The way he's going he won't make nine. Don't say we didn't warn him.
by Ed Boyle