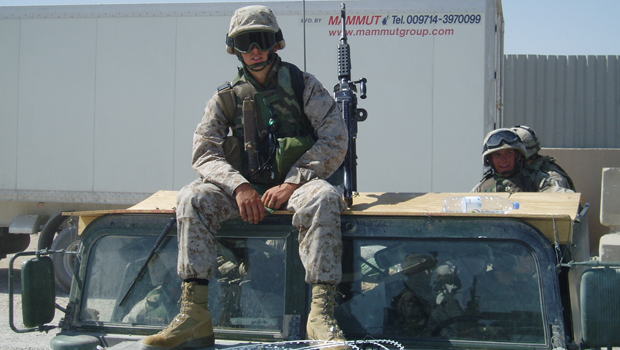 The home of some of the most ferocious fighting during the U.S. war in Iraq is once again witnessing extreme violence not seen in the country since the last of U.S. troops left two years ago, as al Qaeda insurgents regain control of the city of Fallujah in Anbar Province.

In total, almost a third of the 4,486 U.S. troops killed in Iraq died in Anbar Province. Fallujah was the scene of two significant battles in 2004 - Operation Vigilant Resolve and Operation Phantom Fury – where U.S. military fought against al Qaeda militants.

News of the return of al Qaeda to the city has stirred strong emotions among the men and women who fought in Fallujah, the largest urban military operation involving U.S. troops since the battle for Hue City, Vietnam, in 1968.

"I'm absolutely pissed; I don't know how to word it really. It's infuriating, it's just like everything we did and what my brothers and I did, was all for naught," former Marine Matthew Brown, 29, from Fayetteville, N.C., told CBS News.

"I feel kind of guilty that we dipped in. We did our jobs, we did it to the best of our abilities but all deployments come to an end," said Todd Bowers, 34, from D.C., a former Marine who was on his second deployment to Iraq when he fought in the surge for Fallujah.

Ross Caputi, 29, from Boston, is a former Marine who became an anti-war activist. Caputi believes his fellow Marines lost their lives in vain.

"I feel like my friends' lives were squandered, it didn't really have anything to do with national security, not for the United States or for Iraq," he told CBS News.

"The rhetoric that was given about the siege, that we were fighting against terrorism and we were bringing freedom to Iraqis … and making America a safer place; the second siege of Fallujah did none of that and for all those reasons, my friends died in vain," said Caputi.

Thomas Brennan, a 28-year-old vet from Jacksonville, N.C., who served both in Iraq and Afghanistan and lost over half a dozen friends in his battalion, says his concern about the recent events is for those who lost family members.

"I don't think that a Gold Star mother or a Gold Star widow should ever have to feel like her husband's death was unnecessary or it wasn't for a greater good," said Brennan.

James Sperry, who was 19 years old when he was deployed in 2004, suffered a traumatic brain injury and multiple broken bones when he was struck by a rocket-propelled grenade.

"It just shows that what I almost died for - and my life is shortened by my injuries, and I'm already having a lot of issues with my brain - it was almost all done for nothing," said Sperry, 28, from Lebanon, Ill.
"All of our blood spelt is now been erased by al Qaeda going in there and retaking the city. It's heartbreaking to see your biggest accomplishment in the service being taken away and there's nothing I can do about it," he added.

Caputi remembers the Battle of Fallujah was very different to the previous battles he fought in Iraq.

"This whole concept of winning hearts and minds kind of went out of the window. This was more of a World War II spiral all-out attack, with bringing tanks into the city and using air support and bulldozers and armed troops," said Caputi.

"At the time, we didn't realize what exactly we were doing. We didn't realize we were taking part in history. We were just doing what we were told," said Brown, who was shot by a sniper in Fallujah on Veteran's Day, Nov. 11, 2004.

"Fallujah was something were you had two categories of Marines. Marines that were all pumped up and ready to go in there and knowing that this is our big job and then you had the other guys who would do anything to get out of it and get sent back home," said Sperry.

The current battle for Fallujah is the latest manifestation of the sectarian clash between Sunnis and Shi'ites, the two main sects of Islam.

"I'm angry about the situation, that Fallujah is going the way that it's going right now, it's turning to [expletive], and we put a lot of blood, sweat and tears into that city, into that country and it's extremely discouraging to know that it's all falling apart," said Brennan.

For Maj. Charleston Malkemus, 33, from Boston, MA., the ongoing violence is a symbol of how difficult the task at hand really was.

"We're not an occupying force. Ultimately, we were there to basically remove a dictator and provide them [Iraqis] with a direction that they could go with in the future," he said.

Unfortunately, that future has in recent years brought extreme violence back to Iraq, with almost 8,000 civilians killed in 2013 alone.

However, despite the recent gains by Islamic militants, Gen. Ray Odierno, the U.S. Army general who led U.S. forces through some of the most deadly years of the Iraq war, said on Tuesday he opposes sending U.S. combat troops back to Iraq.

Some veterans question whether they should have been there at all.

"We probably shouldn't have been over there in the first place to begin with," concluded Sperry. "I think we were conned into a war. I gave up full-rights scholarship for college to go to the Marine Corps, and I would do it again if I had the same information that I had back in the day, but with the information I know now I wouldn't have gone."

"I personally wouldn't say it was in vain, because I did get to interact with a lot of Iraqis that were genuinely appreciative of what we were doing over there. I think we made a difference for the time being that we were there but to think that it would make a lasting difference, you'd be slightly naïve," said Brennan.

"It makes it really tough, because we did lose a lot of great Marines over there, we lost a tremendous amount of Iraqi civilians and so I always get fearful to say that's it in vain, but it's tragically a lesson that we don't seem to learn when you commit to changing a place, it's a very, very long commitment," said Bowers, who was shot in the face by a sniper east of Fallujah.

But for some Marines, the next step in the Battle of Fallujah is no longer in their hands but in the hands of the Iraqis.

"We felt very proud of what we were doing over there for them [Iraqis], we felt very honored to be there to protect them, and we did the best that we could while we were there, but certainly, it couldn't have lasted forever," said Malkemus.

"To me, knowing that I helped make that difference to those people makes my deployment worth it, because I helped them see how life can be. We couldn't stay there forever, now it's on them to hold their country together," said Brennan.