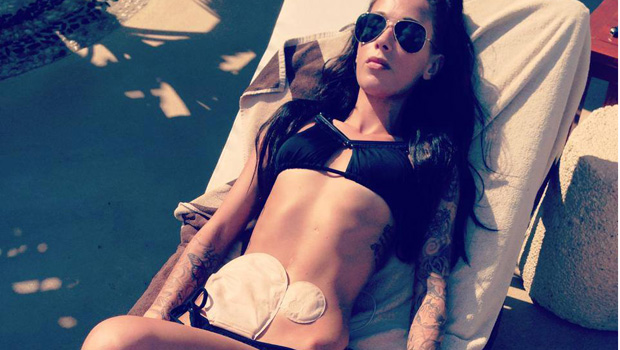 Looking at Bethany Townsend's beautiful face, you'd never think she suffers from Crohn's disease, a debilitating condition that wreaks havoc on a person's digestive system. Earlier this week, the 23-year-old make-up artist and aspiring model posted a striking photo of herself on Facebook sunbathing in a barely-there black bikini with an unusual accessory: a colostomy bag. The photo, which has gone viral, has received more than 200,000 "likes" on Facebook.

She shared her story with Crohn's and Colitis U.K., an organization to raise awareness and funding for research. Townsend, who lives in Worcester, England, reported that she's contended with Crohn's since she was 3-years old but was misdiagnosed early in life. It wasn't until Townsend was 11 and needed urgent surgery to remove a 16-inch section of her bowel that she was given a correct diagnosis.

She's spent her young adult life trying a number of unsuccessful treatments to ease her symptoms including steroids, infliximab, methotrexate, as well as being tube fed for four years. But after undergoing five surgeries, Townsend's bowel ruptured and her doctors told her she'd need to wear the colostomy bags.

"Finally, after three and a half years, I decided that my colostomy bags shouldn't control my life," she wrote. "So when I went to Mexico with my husband in December last year I finally showed I wasn't ashamed. Still hoping for a cure."

A stem cell clinical trial a few years ago led Townsend to develop a MRSA infection of the skin and blood, which nearly killed her. She said she hopes a new drug that hasn't yet made it to the U.K. will help her stay well. The final option for Townsend would be a bowel transplant. Sadly, Townsend admitted that she's running out of treatment options.

Crohn's disease is a type of inflammatory bowel disease that affects all areas of the digestive tract, and causes chronic abdominal pain, diarrhea, fever, weight loss, fatigue, skin problems and anemia. An estimated 1.4 million people in the U.S. have the condition.