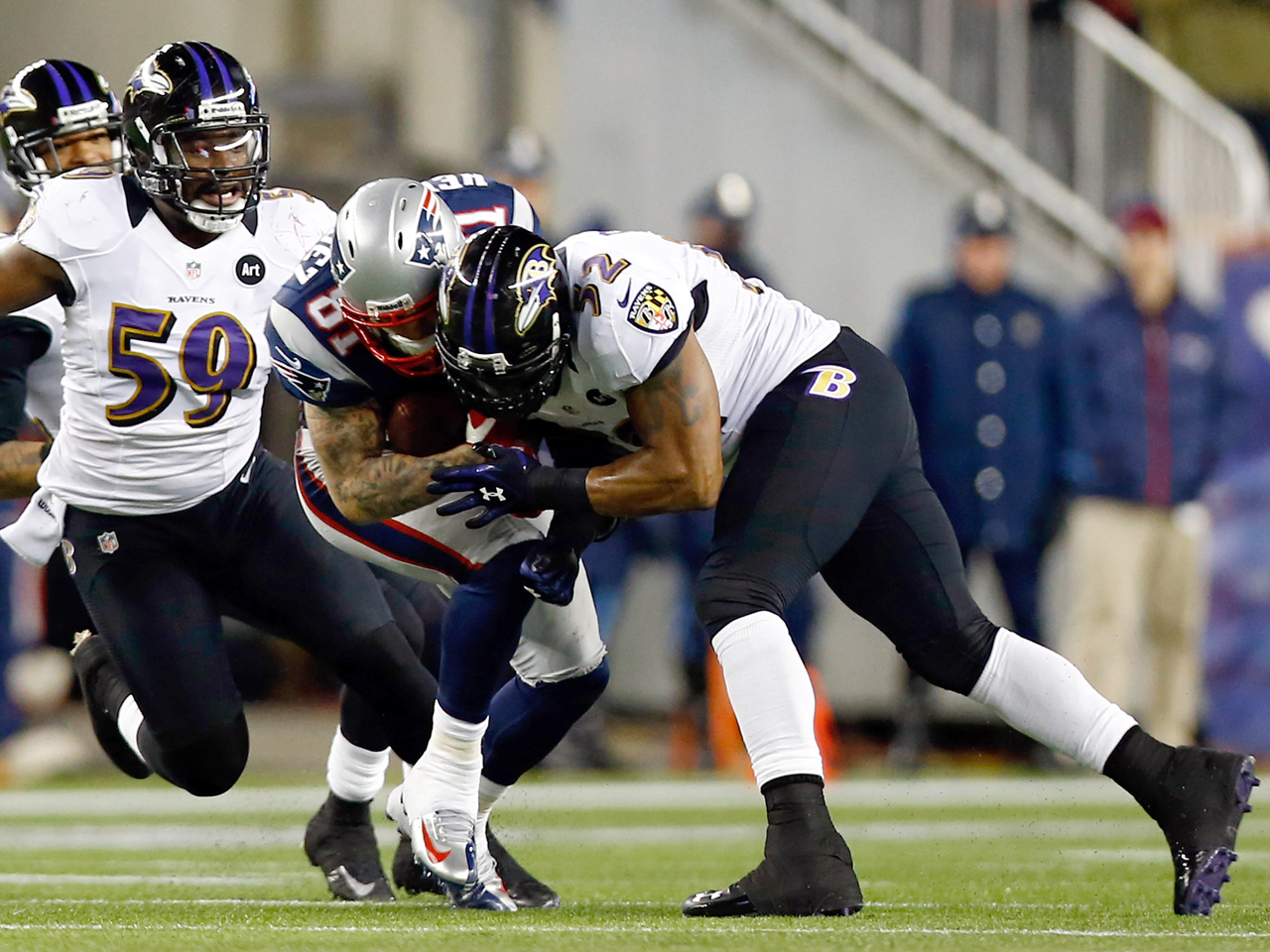 OWINGS MILLS, Md.It was as if linebacker Ray Lewis, safety Bernard Pollard and the rest of the Baltimore Ravens' defense set out to provide a quarter-by-quarter demonstration of how they do business.

About 11 minutes into the AFC championship game against Tom Brady and the New England Patriots, Lewis drew a 15-yard unnecessary roughness penalty for a helmet-to-helmet hit that pushed tight end Aaron Hernandez's chin strap up near his nose.

Then, in the second quarter, linebacker Dannell Ellerbe gave New England another free 15 yards by hitting an offensive lineman in the face mask in response to an after-the-play shove.

Fast-forward to early in the third, and Pollard was flagged for his team's third personal foul of the day, thanks to a leaping hit against the helmet of receiver Wes Welker. Two plays later, Welker dropped a third-down pass.

And finally, a couple of minutes into the fourth, Pollard struck again. No penalty was called this time, but his helmet-to-helmet hit on Stevan Ridley resulted in a fumble and left the running back on his back, looking limp and helpless. Ridley left the game with a head injury, while the Ravens recovered the football and were on their way to next Sunday's Super Bowl against the equally aggressive San Francisco 49ers.

In an age of high-powered offenses in the NFL — this season's games featured 45.5 points, the highest average since 1965 — and increasingly safety-conscious officials, a pair of hard-hitting, oft-penalized defenses are meeting for the championship. Those second-half shutouts of the Patriots and Atlanta Falcons in the conference title games were only the latest reminder from the 49ers and Ravens that defense still matters.

Sometimes it isn't about some sort of newfangled, complicated Xs-and-Os defense, either. It's about players pushing it to the limit — and, sometimes, perhaps beyond — in a league that has been taking steps to rein in certain kinds of hits.

"Being physical? That's vital, man. That's what we live by," Baltimore cornerback Cary Williams said. "That's something that Ray Lewis established here back in `96, and we're going to continue to do that. It's been, I guess, in our bloodline. It's in our DNA. We don't bring in guys that's timid. We don't bring in guys that's not going to hit anybody."

What about San Francisco's defense?

"They're just as physical as we are," Williams replied, offering what in his mind is probably the highest compliment he could pay another team's players.

San Francisco defensive lineman Justin Smith deflected a question about whether his defense is as good as Baltimore's, replying: "I mean, we're just trying to win a ring."

Actually, that's probably better asked about the Ravens: Are they as good as the 49ers?

Opposing offenses scored 15.5 points per game against the 49ers, which ranked third in the 32-team NFL in the regular season. The Ravens gave up 20 per game, 11th-best.

The 49ers allowed only two touchdown passes of 20-plus yards, the lowest total in the league. Baltimore allowed six.

During the regular season, the Ravens were whistled for an NFL-high 19 personal fouls. Their team also was penalized more yards overall than anyone else.

The 49ers, for their part, tied for fourth with 15 personal fouls and ranked fifth in penalty yardage.

"When you go against a team that has that kind of reputation, and you can watch it on film, it definitely gets in your mindset and you know you have to deal with it," Ravens linebacker Paul Kruger said. "I'm not sitting here saying that we're intimidating everybody or anything like that. But you know we're coming to hit you, for sure."

This is a guy who has developed a knack for leaving injured opponents in his wake. It was his Week 1 hit on Brady in 2008, for example, that cost the star QB the rest of that season.

"For everybody, for fans, people who don't understand — they want to say, well, I'm being a dirty player. Well, no, I'm not being a dirty player. I'm just playing defense," said Pollard, a seventh-year veteran out of Purdue. "And I ask you the question: If I came into your house, with your door locked, and I just kicked it down, and came to try to steal stuff, you're going to defend your house, am I correct? So that's the stand I take. We've got grass behind us. We've got the end zone that we have to defend, we've got to protect."

If his is a way of thinking about the game that, as Williams noted, Lewis brought to Baltimore, the 49ers' current group — featuring players such as safety Donte Whitner and linebacker Patrick Willis — can trace its lineage back to Hall of Fame safety Ronnie Lott.

He, for one, enjoys watching these two teams do what they do when opponents have the ball.

"There is a Steel Curtain or Chicago Bears type mentality with both of these defenses. Both of them bring a kind of edge to how they play," Lott said in a telephone interview. "They both swarm to the ball, get a lot of people to the ball. It won't be just one guy hitting you. There will be a number of guys."

Lott spoke admiringly about how well the 49ers and Ravens do what should come more naturally than it seems to in the NFL nowadays: tackle.

Only eight teams allowed an average of 5 yards or fewer after a catch this season, and two are meeting to decide who gets to take home the Lombardi Trophy.

Seven of the 46 previous Super Bowls ended with MVP awards going to defensive players. That includes 2001, when Baltimore's Lewis was honored; it hasn't happened since 2003, with Tampa Bay Buccaneers free safety Dexter Jackson.

But with players such as Lewis and Terrell Suggs on the field, plus Aldon Smith and Justin Smith, Patrick Willis and NaVorro Bowman, Whitner and Pollard, perhaps the MVP of Sunday's game will be someone who prevents points.