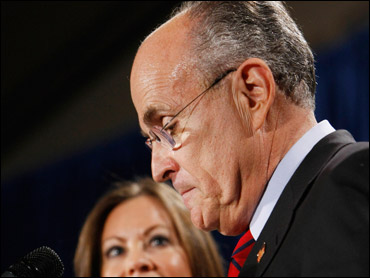 Rudy Giuliani had hoped that his presidential campaign would serve as an example of how an unorthodox strategy could propel a candidate to his party's nomination.

Instead, it appears more likely to be remembered as a cautionary tale.

Giuliani's third-place finish in Florida, the state on which he had staked his presidential bid, marked the end for a campaign that was unable to capitalize on the candidate's national name recognition and strong reputation on homeland security issues.

"We ran a campaign that was uplifting," Giuliani told supporters in a concession speech Tuesday night. "You don't always win, but you can always try to do it right." CBS News has confirmed that Giuliani is expected to exit the race and plans to endorse Sen. John McCain on Wednesday at 6 p.m. at the Ronald Reagan Presidential Library and Museum.

The national frontrunner for most of last year, Giuliani elected to focus on large, delegate rich states instead of those that come early in the primary calendar - a decision made in full only after briefly competing in places like New Hampshire to little success. While his rivals were making headlines for their early victories, the former New York City mayor faced a flood of negative stories about his personal life and judgment, many tied to third wife Judith Nathan and disgraced longtime ally Bernard Kerik.

"Giuliani got a significant amount of bad press for about a week and a half for personal issues while everybody else was getting good press from the early primaries," said Tallahassee-based political consultant Brett Doster. "The negative personal stories combined with the resurgence of John McCain - the only guy in the field who had more credibility on national security - began to suck all the oxygen away from Giuliani's part of the aquarium."

"His reputation as a crisis manager was great at the beginning," said Susan McManus, a political scientist at the University of South Florida. "But the more people found out about him personally, the less they liked him. And I don't want to cast that as just social conservatives. It was Republicans in general. Character was something that Giuliani just fell short on."

According to CBS News senior political correspondent Jeff Greenfield, the shift in public attention from the Iraq war to the economy may have hampered Giuliani.

CBS News exit polls bear that out. According to analysis by CBS News election consultant Monika McDermott, while Giuliani and Romney split the vote of those who considered terrorism their top issue, only 21 percent of Florida primary voters listed it as their most important issue. The economy, meanwhile, swamped all other concerns, ranking as the top issue for nearly half of Florida voters. And Giuliani won only 12 percent of their vote.

McManus said that Giuliani was initially popular in Florida in part because he seemed likely to be the Republican nominee, but his support in the state faded as he no longer looked like the inevitable candidate.

"A lot of Florida Republicans were just under the assumption he was going to get the nomination so they said 'ok, we'll support him,'" she said. "But after the early primaries and with the others rising in the polls, his soft support started to loosen."

Indeed, according to the exit polls, Giuliani's fade in Florida mirrored his decline nationally. More than half of Giuliani's voters on Tuesday decided to support him last year. Voters who decided later in the game, meanwhile, backed McCain and Romney: Giuliani received only 12 percent of the vote from those who decided in the past week, versus McCain and Romney's 36 percent each.

Despite his relentless campaigning in Florida, Giuliani was unable to maintain his strong position in state polls.

"He didn't wear well in Florida," said GOP strategist David E. Johnson. "In South Florida there are a lot of Northeast transplants, but in Florida there are a lot of people from the Midwest, too - places like Ohio. And to them he came across as this abrasive New Yorker, this stereotypical New Yorker. Everything that he talked about was related to New York City. It rubbed people the wrong way."

The former mayor struggled even among those expected to be his natural constituency, according to exit polls. Moderate and independent voters chose McCain, as did Florida's Hispanic electorate. Giuliani even lost the Catholic vote, a bloc of support he could always count on in New York. Catholics went for both McCain - 38 percent - and Romney - 28 percent - over Giuliani at 24 percent.

Tonight's results mean the end of a candidacy that will be remembered for its failure to capitalize on the reputation Giuliani built in the wake of the Sept. 11th attacks.

There are some candidates who can walk into the room and everybody gets their hands out of the cocktail jars because they want to be with the candidate," said Johnson. "Giuliani is a candidate like that. With Romney, nobody would really run over to see him. Rudy had the star quality, and that translated to those early poll numbers. But it was always somewhat artificial."