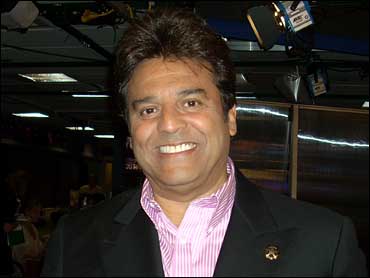 And at almost 60 years old, he is still patrolling the highways.

Although it's hard to forget the image of Estrada on the small screen in his tight polyester police uniform and aviator sunglasses riding a motorcycle as California Highway Patrol Officer Frank "Ponch" Poncherello, he now takes the law into his own hands - and it's no act.

Estrada is a deputy sheriff in Virginia and a reserve police officer in Indiana. He also publicly supported California's newly implemented law that prohibits all drivers from using handheld cell phones while driving.

The just-passed law also states that motorists 18 and over may use a "hands-free device," but drivers under the age of 18 may not use a cell phone or hands-free device while driving.

Estrada was shocked to see the prevalence of child pornography and wanted to take a stand against it, so he teamed up with ICAT (Internet Crimes Against Children).

Although he still has those Poncherello good looks and full head of hair, Estrada will be turning 60 in March and realizes he won't be able to be on the job forever. Therefore, ICAT will be a way for him to continue his work.

Estrada, who is also a reserve police officer in Indiana, has to work 96 hours a year on the street to keep his reserve status, he explained. 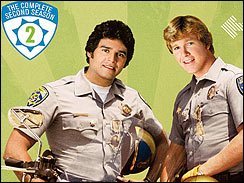 (Warner Home Video)
CHiPs, meanwhile, known for its machismo in the late '70s and for shining a positive light on Hispanic-Americans, has acquired a comical cult-like following today.

Estrada has fond memories of playing "Ponch" alongside Jon Baker (played by Larry Wilcox) and memorable guest stars such as the late Evel Knievel, who performed his incredible motorcycle stunts.

"We had stunt people, but we did our own driving, pulling up and out and some of the chases. We chased behind a camera truck," Estrada said.

Fans of the popular late '70s sitcom can catch "Ponch" in action in "CHiPs: The Complete Second Season," which was released by Warner Home Video on June 3.

CHiPS will also be brought to the big screen with a film adaptation that is slated to be released in early 2009. "That '70s Show" actor Wilmer Valderrama will play "Ponch."