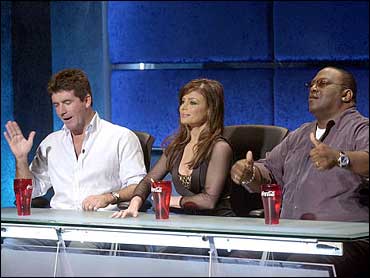 Used to be, when something was inadequate or downright lame, you would dismiss it as "amateurish."

But on TV these days, amateurism is in full flower - and applauded.

But TV's rank amateurism has its grip on unscripted-but-staged fare overall, the sort of programming that can confer instant stardom on such gloriously unaccomplished amateurs as Evan ("Joe Millionaire") Marriott.

Amateurism even accounts for the collaborative role widely granted to viewers in this age of interactive media.

"We want to know what YOU think," the audience is told, with no expertise required - or much else. (Any viewer with a pulse and a telephone will be recognized by "American Idol," right along with its professionally knowledgeable judges.)

A decade ago, critic James Wolcott wrote a piece for The New Yorker magazine lamenting the "identity crisis" with which TV entertainment was afflicted: "The barriers between professional and amateur have been eaten away. Anybody can get into the act."

What set him off in December 1993 - notably the skanky guests populating daytime talk - is yesterday's news. But Wolcott may have been prescient when he imagined "in a few years the hour-long prime-time drama itself will be a rare species, replaced by cheaper, `reality' programming." The situation he diagnosed then is today an epidemic.

TV mainstays like "Cops," "Real World" and "World's Funniest Home Videos" have been joined by ever more opportunities for ordinary people to get into the act. You can eat a horse's rectum on "Fear Factor" or audition soul mates on a dating game. You can wage high-stakes exhibitionism in a house ("Big Brother") or in the wilds ("Survivor").

On "Are You Hot?" you can stand in your skivvies before Hotness Czar Lorenzo Lamas while he deconstructs your abs with his laser-beam Flaw Finder.

What a godsend these shows are for the networks! Scripted dramas and comedies make such extravagant demands on a production budget. "Reality TV" alleviates the need for those costly performers and those pesky writers and directors!

Nonetheless, certain TV professionals are unwilling to leave amateurism to the amateurs. Behold battling demi-stars like Emmanuel Lewis or Melissa Rivers as they share a house ("The Surreal Life") or an Australian rain forest ("I'm a Celebrity - Get Me Out of Here!") in an effort to demonstrate that, at heart, they're just as ordinary as you.

In short, the barriers have been eaten away. And, for the moment, the New Egalitarianism is a smash.

Sure, fans of so-called reality TV defend it for its underlying truth. Ryan Sutter, the chosen mate of Trista Rehn on "The Bachelorette," explained its appeal (if a bit redundantly) as "real people with real feelings and real emotions."

But the truth is, storytelling on "reality TV" observes the same traditions as any scripted show.

For instance, Evan gave "Joe Millionaire" a heartwarming finish by choosing the "good" girl (Zora) over the "bad" girl (Sarah). Not the least bit believable, it was the sort of comfy, satisfying ending you've seen a thousand times before. And it proves that the best way to enjoy reality TV is with the age-old prescription for watching any drama: a willing suspension of disbelief.

How else to accept the bombshell Trista-picks-Ryan resolution of "The Bachelorette"? As depicted on the series, these two individuals have almost nothing in common. They have only a rudimentary acquaintance with each other after a courtship grounded in make-believe.

What holds this pair together?

That's a good explanation for TV love. But now that these lovers' TV show is over, why should we believe they exist outside of it? What makes Trista and Ryan - whoever they may be in real life - big news?

And what's next for us in our media besottedness? Maybe asking Martin Sheen how he likes being president of the United States and accepting his reply when he says, "I like it fine. And I like living in the White House, too!"

Except that Sheen, portraying President Bartlet on "The West Wing," is more convincing than Trista and Ryan in their TV roles. That's because he's a real actor. He's got real writers. He's got real co-stars. He's no amateur.