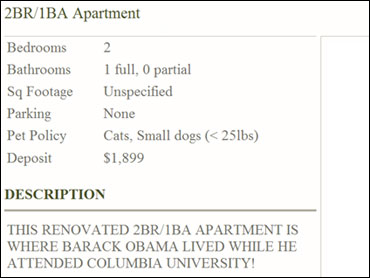 A Craigslist ad appeared this week for a New York apartment where the president lived when he attended Columbia University in the early 1980s.

According to the listing, the third-floor walk-up near Columbia's campus in the Morningside Heights neighborhood has "great light, big windows" as well as new kitchen appliances.

Obama was in New York from 1981 to 1985, attending Columbia and then working. He lived in several apartments in Manhattan and Brooklyn during that time.

According to "The Bridge," a recent book about Obama by New Yorker editor David Remnick, the West 109th Street apartment that is available on Craigslist was a dump.

Real estate agent Dalila Bella said the place has been fixed up.

"Obviously, that was a long time ago," Bella said. "The heat works just fine now."

Bella said the apartment that Obama shared with a roommate has two bedrooms but one of them is not technically a bedroom because it doesn't have a window.

She said the Craigslist ad has generated a lot of interest.

"People are excited," Bella said. "I don't know if they want to live there because he did, but for sure it doesn't hurt."

A White House spokesman did not immediately return a call seeking comment.