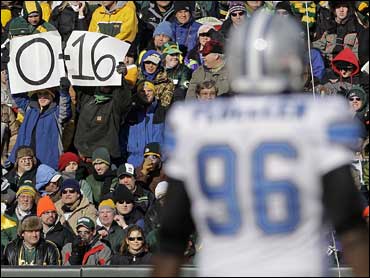 The Detroit Lions own a distinction no team wants: worst in NFL history.

Facing one last chance to avoid their dubious destiny, the Lions lost Sunday's season finale to the Green Bay Packers 31-21 to complete the league's first 0-16 season. The 1976 expansion Tampa Bay Buccaneers (0-14) were the last NFL team to complete a season without a victory.

It didn't come without a fight. After falling behind 24-14 midway through the fourth quarter, Kevin Smith's 9-yard touchdown run put Detroit back within a field goal.

But Packers quarterback Aaron Rodgers responded with a 71-yard touchdown pass to Donald Driver and the Lions' Dan Orlovsky threw an interception on fourth-and-27 with 3 minutes left, dooming Detroit to futility of historic proportion.

Orlovsky was 22-of-42 for 225 yards with two touchdowns and two interceptions for the Lions, whose bid to stay out of the record book came undone in large part due to a pair of ill-advised penalties.

Trailing 14-7 early in the third quarter, Lions punter Nick Harris pinned the Packers at their 10-yard line. Safety Kalvin Pearson then put a hard hit on Grant to cause a fumble, and recovered the ball at the Packers 11.

Calvin Johnson caught a pass from Orlovsky in the flat and broke three tackling attempts to score a tying 14-yard touchdown with 10:20 left in the third quarter.

But the Packers put together a 12-play, 62-yard drive for a 36-yard field goal by Mason Crosby. After a three-and-out by Detroit's offense, Lions linebacker Ernie Sims' penalty for a late hit out of bounds on Grant played a key role on a drive that ended with a 5-yard pass from Rodgers to fullback John Kuhn.

The Lions weren't finished, as Orlovsky used two long completions to John Standeford to set up Smith's touchdown with 8:34 left. After the ensuing kickoff, Rodgers reared back and threw deep to Driver, who blew past Lions cornerback Leigh Bodden and ran in for a touchdown.

Detroit fell behind 14-0 as Orlovsky managed a measly 9 yards passing in the first quarter. But the Lions' defense showed some fight early on before allowing backup running back DeShawn Wynn to score on a 73-yard touchdown.

Rodgers also threw a fade to rookie tight end Jermichael Finley in the end zone for a 14-0 lead.

Detroit scored early in the second quarter, a 9-yard touchdown from Orlovsky to Johnson on third-and-goal.