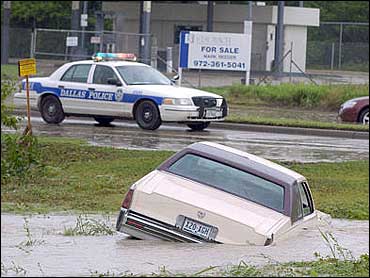 An estimated foot of rain fell during fierce storms overnight in parts of North Texas, flooding homes and highways and knocking out power to thousands. One man died in a weather-related wreck that toppled power lines onto his vehicle and cut power to homes.

Southern Dallas County was especially hard hit by flooding, with 175 to 200 homes damaged by high water in the suburb of Lancaster. Flood waters damaged the Lancaster police headquarters.

The National Weather Service, which estimated up to 12 inches of rain fell in Lancaster, issued new flash flood warnings early Thursday for the Dallas-Fort Worth area as more thunderstorms developed.

Lancaster police evacuated residents from more than 240 homes early Thursday after Ten-Mile Creek rose out of its banks alongside one subdivision.

"It's a mess out here," dispatcher Debbie Brand said. "We had to get those people out of their houses."

An estimated 35,000 TXU Electric Delivery customers were without power early Thursday, the utility said. And parts of Interstates 20, 35 and 45 were closed for a time by high water.

"Our operations are still up and running," spokeswoman Opal Mauldin-Robertson told CBS Radio News. "We have assistance from the Dallas County Sheriff's Department, so if 911 is contacted, residents are receiving emergency services."

Dispatchers were using handheld two-way radios to communicate with officers.

Devlin said 50 to 100 residents said they suffered major damage in the storms, which intensified overnight after an upper-level low pressure system moved into the Dallas-Fort Worth area Thursday evening.

The Waxahachie Police Department brought in a boat to help with rescues.

One motorist was killed when his pickup truck knocked over a utility pole in a weather-related wreck and live wires fell onto his vehicle in the Dallas suburb of Oak Cliff. The victim, who was not immediately identified, could not be pulled from his vehicle for some time. The impact of the wreck cut power to about 15 homes.

In the northeast Fort Worth suburb of Haltom City, fire-rescue officials rescued a 16-year-old boy who had been swept into a flood-swollen creek that also flooded the Skyline Mobile Home Park, threatening 12 homes, and firefighters were evacuating residents.

"If the weather continues to get worse, it could be a problem," Deputy Chief Wes Rhodes said. "As long as we stay ahead of it, we're all right."

Wind gusts of 58 mph were measured at Alliance Airport, and trees were uprooted in Lewisville and elsewhere. Dallas-based Southwest Airlines delayed some flights and canceled others at Love Field. Flights were also delayed at Dallas-Fort Worth International Airport.