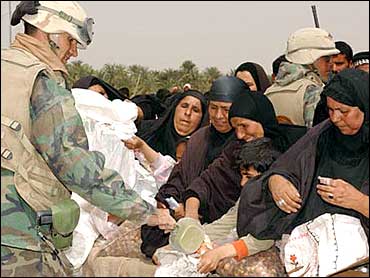 Mohammed Nadir has hardly worked since the war began six weeks ago. His money has run out and other than a 3-pound bag of rice, his family's kitchen cupboard is bare.

"We can hardly survive," said Ahlam Nadir, his wife. "Buying food is not easy."

Most Iraqis, like Nadir, depend on food rations delivered as part of a U.N.-monitored program for their daily meals. But the last deliveries were before the war, and the World Food Program estimates most families have only enough food to last until the end of the month. The WFP is rushing flour, rice and beans to the country, hoping to head off a disaster.

"We are trying to bring in the food before there is a crisis," said Torben Due, the World Food Program representative for Iraq. "There is no alternative to bringing in the food now and getting the system up and running."

WFP officials met with old Iraqi Trade Ministry officials Saturday to see how much of the food that was stockpiled in the country was looted and when food distribution could resume.

Iraqis were given a government ration card that entitles them to a monthly supply of rice, beans, tea, sugar and soap. The food was purchased by Saddam Hussein's government as part of the U.N.-monitored program in place since 1996, which allowed Iraq to sell oil to buy food and other vital supplies for civilians. The program was an attempt to ease the hardship caused by U.N. trade sanctions imposed after Iraq's 1990 invasion of neighboring Kuwait.

Before the war started in March, a two-month ration was distributed to Iraqi families, but it was short on oil, beans and milk.

At least 60 percent of Iraq's 24 million people — and by some counts, even more — depend on the ration system, according to the United Nations. But the oil-for-food program and the rations distribution have been suspended since the war began — and will be for the foreseeable future.

The United States wants to end the program quickly to lift restrictions on the sale of Iraqi oil. But the fate of the program must be determined by the U.N. Security Council, where it is tied to the knotty issue of sanctions and the search for Iraqi weapons of mass destruction.

U.N. officials, however, expect food distributions to resume and continue for several months until the situation in Iraq stabilizes.

Two weeks ago, the WFP started shipping rice and flour in through Jordan, and Due said he expects new rations to be distributed later this month.

And last week, a WFP ship carrying 14,000 tons of rice docked at the Iraqi port of Umm Qasr, the largest aid shipment to arrive by sea since the war. The shipment was the first provided by the WFP by sea, signaling the opening of a significant entry point for aid deliveries.

Before the arrival of the ship, which sailed from Karachi with U.S.-donated rice, only four smaller vessels had braved the difficult shipping channel that leads to the port. The channel had been heavily mined by forces loyal to Saddam Hussein.

The Nadir family — Mohammed, his wife Ahlam and their daughter Hanan — ran out of most of their food last week. Nadir works day jobs as a welder and as soon as the bombing started March 20, his work stopped.

At the same time, the war sent prices skyrocketing. Sugar, chicken and other foods the family bought on the open market to supplement their rations tripled in price.

Nadir says his meager savings were exhausted last week. The family now depends on the small amount of money he earns from day to day and help from family and friends. This week, however, Nadir found work for only one day and earned just $1.75.

In their stark kitchen, an open alcove in the hallway of their cramped two-bedroom apartment, was a pan of beans soaking in water and two onions.

"The U.N. has to act quickly," said Ahlam Nadir, wearing a brown dress completely covered by the black cloak that traditional Iraqi women wear. As she spoke, a quick three-shot burst of gunfire rang out. The Nadirs' neighborhood, like many in Baghdad, was the scene of fighting and looting after Saddam fell.

"We have to have a future," Ahlam Nadir said. "If Mohammed gets sick, what will happen to us?"

The family's apartment is in an impoverished, fly-infested section of Baghdad's old city, a maze of twisting alleyways filled with two-story whitewashed cement and stone buildings. Stinking black sewage flows through a groove in the middle of the street.

Most residents depend on the food rations. When a reporter visited the neighborhood Sunday, a crowd gathered, hoping he was a U.N. official who might start registering them for new, expanded postwar rations.

"We have been liberated, but so far we've seen nothing," Ahlam Nadir said. "We're getting restless."