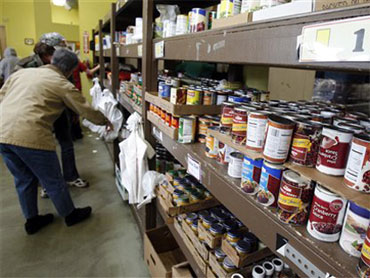 Prentice Jones worked construction jobs around Chicago for most of his 60 years and is quick to boast of a foreman job he once held at a revamped city college and 23 years at a steel company.

But these days, work has been so scarce that the man with a penchant for cowboy hats has been forced to move in with his mother and do something this week he never expected - visit a food pantry.

"There's no work now," Jones said while waiting in line at St. Columbanus Parish for a frozen turkey and bags of apples, bread and potatoes. "I pray it's temporary."

A surge in first time visitors has contributed to the greatest demand in years at food banks nationwide, according to Feeding America, a Chicago-based national food bank association. Many of the first timers were middle class but lost jobs or had their wages cut.

"They were doing pretty well," said Ross Fraser of Feeding America. "They've completely had the rug pulled out from under them."

Federal agencies and national organizations have just started tracking first timers. But anecdotal evidence and statistics from individual pantries is clear: More and more new faces are appearing among the approximately 25 million Americans who rely on food pantries each year.

St. Columbanus Pantry, which serves about 500 people a week on Chicago's South Side, has had up to 50 new people sign up each week since February.

The Friendly Center in Orange, Calif., serves 80 families a day, with about 20 new people trying to qualify each day, far more than last year.

"The line has grown so long that when you walk outside, it's overwhelming," said Jesse Taylor, senior director at the pantry. "A lot of people are coming out in suits, they're carrying brief cases."

Food banks across the country report about a 30 percent increase in demand on average, but some have seen as much as a 150 percent jump in demand from 2008 through the middle of this year, according to Feeding America.

Reliance on food banks and the number of Americans using food stamps - at least 35 million currently - are two indicators of hunger. The U.S. Department of Agriculture said earlier this month that 49 million people, or 14.6 percent of U.S. households, struggle to put food on the table, the most since the agency began tracking food security levels in 1995.

First timers to food banks have worries others might not experience.

For starters, they may not know what to do.

"Some don't have the coping skills, they've never been in this situation," said Elizabeth Donovan, a director at the Northern Illinois Food Bank, which serves 13 counties. "Asking for help is difficult."

Jones was cajoled into coming into the food pantry by a friend who knew where to go, where to wait and how to apply for services.

But others say the experience is fraught with shame, confusion or anger.

"We're hearing from more and more middle class who have never in their life gone to a food pantry," said Diane Doherty, an executive director at the Illinois Hunger Coalition. "They're very, very frustrated and angry."

About half of the almost 40,000 families who have been fed at Holy Family Food Pantry in Waukegan, Ill., about 40 miles north of Chicago, are new, services director Barb Karacic said.

They include Gail Small, a 55-year-old school bus driver who got laid off from her $16 an hour job at the Waukegan Public School District earlier in the year and hasn't been able to find work since.

Others say at some point, the need to survive trumps emotions.

Linda Herrera, 59, went to All Saints Parish on Detroit's southwest side for the first time this week. Herrera, who is on state assistance, said the embarrassment of having to pick up food was offset by her empty cupboards.

"We were down to practically nothing," she said, carrying out bags containing juice, mashed potatoes, dried milk, rice and beans. "I'm trying to just make it now 'til the end of the month, until I get my check."