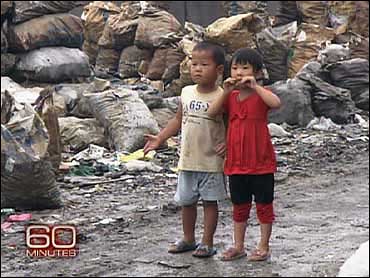 60 Minutes is going to take you to one of the most toxic places on Earth -- a place that government officials and gangsters don't want you to see. It's a town in China where you can't breathe the air or drink the water, a town where the blood of the children is laced with lead. It's worth risking a visit because, as correspondent Scott Pelley first reported last November, much of the poison is coming out of the homes, schools and offices of America.

This is a story about recycling - about how your best intentions to be green can be channeled into an underground sewer that flows from the United States and into the wasteland.

That wasteland is piled with the burning remains of some of the most expensive, sophisticated stuff that consumers crave. And 60 Minutes and correspondent Scott Pelley discovered that the gangs who run this place wanted to keep it a secret.

What are they hiding? The answer lies in the first law of the digital age: newer is better. In with the next thing, and out with the old TV, phone or computer. All of this becomes obsolete, electronic garbage called "e-waste."

Computers may seem like sleek, high-tech marvels. But what's inside them?

"Lead, cadmium, mercury, chromium, polyvinyl chlorides. All of these materials have known toxicological effects that range from brain damage to kidney disease to mutations, cancers," Allen Hershkowitz, a senior scientist and authority on waste management at the Natural Resources Defense Council, explained.

"The problem with e-waste is that it is the fastest-growing component of the municipal waste stream worldwide," he said.

Asked what he meant by "fastest-growing," Hershkowitz said. "Well, we throw out about 130,000 computers every day in the United States."

And he said over 100 million cell phones are thrown out annually.

At a recycling event in Denver, 60 Minutes found cars bumper-to-bumper for blocks, in a line that lasted for hours. They were there to drop off their computers, PDAs, TVs and other electronic waste.

Asked what he thought happens once his e-waste goes into recycling, one man told Pelley, "Well my assumption is they break it apart and take all the heavy metals and out and then try to recycle some of the stuff that's bad."

Most folks in line were hoping to do the right thing, expecting that their waste would be recycled in state-of-the-art facilities that exist here in America. But really, there's no way for them to know where all of this is going. The recycling industry is exploding and, as it turns out, some so-called recyclers are shipping the waste overseas, where it's broken down for the precious metals inside.

Executive Recycling, of Englewood, Colo., which ran the Denver event, promised the public on its Web site: "Your e-waste is recycled properly, right here in the U.S. - not simply dumped on somebody else."

That policy helped Brandon Richter, the CEO of Executive Recycling, win a contract with the city of Denver and expand operations into three western states.

Asked what the problem is with shipping this waste overseas, Richter told Pelley, "Well, you know, they've got low-income labor over there. So obviously they don't have all of the right materials, the safety equipment to handle some of this material."

Executive does recycling in-house, but 60 Minutes was curious about shipping containers that were leaving its Colorado yard. 60 Minutes found one container filled with monitors. They're especially hazardous because each picture tube, called a cathode ray tube or CRT, contains several pounds of lead. It's against U.S. law to ship them overseas without special permission. 60 Minutes took down the container's number and followed it to Tacoma, Wash., where it was loaded on a ship.

When the container left Tacoma, 60 Minutes followed it for 7,459 miles to Victoria Harbor, Hong Kong.

It turns out the container that started in Denver was just one of thousands of containers on an underground, often illegal smuggling route, taking America's electronic trash to the Far East.

Our guide to that route was Jim Puckett, founder of the Basel Action Network, a watchdog group named for the treaty that is supposed to stop rich countries from dumping toxic waste on poor ones. Puckett runs a program to certify ethical recyclers. And he showed 60 Minutes what's piling up in Hong Kong.

"No way. It is absolutely illegal, both from the standpoint of Hong Kong law but also U.S. law and Chinese law. But it's happening," Puckett said.

60 Minutes followed the trail to a place Puckett discovered in southern China - a sort of Chernobyl of electronic waste - the town of Guiyu. But we weren't there very long before we were picked up by the cops and taken to City Hall. We told the mayor we wanted to see recycling.

So he personally drove us to a shop.

"Let me explain what's happening here," Pelley remarked while in Guiyu. "We were brought into the mayor's office. The mayor told us that we're essentially not welcome here, but he would show us one place where computers are being dismantled and this is that place. A pretty tidy shop. The mayor told us that we would be welcome to see the rest of the town, but that the town wouldn't be prepared for our visit for another year.

"So we were allowed to shoot at that location for about five minutes," Pelley explained further. "And we're back in the mayor's car headed back to City Hall, where I suspect we'll be given another cup of tea and sent on our way out of town with a police escort no doubt."

"This is really the dirty little secret of the electronic age," Jim Puckett said.

Greenpeace has been filming around Guiyu and caught the recycling work. Women were heating circuit boards over a coal fire, pulling out chips and pouring off the lead solder. Men were using what is literally a medieval acid recipe to extract gold. Pollution has ruined the town. Drinking water is trucked in. Scientists have studied the area and discovered that Guiyu has the highest levels of cancer-causing dioxins in the world. They found pregnancies are six times more likely to end in miscarriage, and that seven out of ten kids have too much lead in their blood.

"These people are not just working with these materials, they're living with them. They're all around their homes," Pelley told Allen Hershkowitz.

"The situation in Guiyu is actually pre-capitalist. It's mercantile. It reverts back to a time when people lived where they worked, lived at their shop. Open, uncontrolled burning of plastics. Chlorinated and brominated plastics is known worldwide to cause the emission of polychlorinated and polybrominated dioxins. These are among the most toxic compounds known on earth," Hershkowitz explained.

"We have a situation where we have 21st century toxics being managed in a 17th century environment."

The recyclers are peasant farmers who couldn't make a living on the land. Destitute, they've come by the thousands to get $8 a day. Greenpeace introduced us to some of them. They were afraid and didn't want to be seen, but theirs are the hands that are breaking down America's computers.

"The air I breathe in every day is so pungent I can definitely feel it in my windpipe and affecting my lungs. It makes me cough all the time," one worker told Pelley, with the help of a translator.

"If you're worried about your lungs and you're burning your hands, do you ever think about giving this up?" Pelley asked.

"Yes, I have thought of it," the worker said.

Asked why he doesn't give it up, the worker told him, "Because the money's good."

"You know, it struck me, talking to those workers the other day, that they were destitute and they're happy to have this work," Pelley told Puckett.

"Well, desperate people will do desperate things," Puckett replied. "But we should never put them in that situation. You know, it's a hell of a choice between poverty and poison. We should never make people make that choice."

Pelley, Puckett, and the 60 Minutes team passed by a riverbed that had been blackened by the ash of burned e-waste.

"Oh, man, this is - it's unbelievably acrid and choking," Pelley said, coughing.

"This is an ash river. This is detritus from burning all this material and this is what the kids get to play in," Puckett explained.

After a few minutes in the real recycling area, we were jumped.

Several men struggled for our cameras. The mayor hadn't wanted us to see this place, and neither did the businessmen who were profiting from it. They got a soil sample that we'd taken for testing, but we managed to wrestle the cameras back.

What were they afraid of?

"They're afraid of being found out," Puckett said. "This is smuggling. This is illegal. A lot of people are turning a blind eye here. And if somebody makes enough noise, they're afraid this is all gonna dry up."

Back in Denver, there's no threat of it drying up. In fact, it was a flood.

And Brandon Richter, CEO of Executive Recycling, was still warning of the dangers of shipping waste to China. "I just heard actually a child actually died over there breaking this material down, just getting all these toxins," he said.

Then Pelley told him we'd tracked his container to Hong Kong.

"This is a photograph from your yard, the Executive Recycling yard," Pelley told Richter, showing him a photo we'd taken of a shipping container in his yard. "We followed this container to Hong Kong."

"And I wonder why that would be?" Pelley asked.

"The Hong Kong customs people opened the container…and found it full of CRT screens which, as you probably know, is illegal to export to Hong Kong," Pelley said.

"Yeah, yep," Richter replied. "I don't know if that container was filled with glass. I doubt it was. We don't fill glass, CRT glass in those containers."

"This container was in your yard, filled with CRT screens, and exported to Hong Kong, which probably wouldn't be legal," Pelley said.

"No, absolutely not. Yeah," Richter said.

"Can you explain that?" Pelley asked.

"Yeah, it's not - it was not filled in our facility," Richter said.

But that's where 60 Minutes filmed it. And we weren't the only ones asking questions. It turns out Hong Kong customs intercepted the container and sent it back to Executive Recycling, Englewood, Colorado, the contents listed as "waste: cathode ray tubes."

U.S. customs x-rayed the container and found the same thing. 60 Minutes showed Richter this evidence, and later his lawyer told us the CRTs were exported under Executive Recycling's name, but without the company's permission.

"I know this is your job," Richter told Pelley. "But, unfortunately, you know, when you attack small business owners like this and you don't have all your facts straight, it's unfortunate, you know?"

But here's one more fact: the federal Government Accountability Office set up a sting in which U.S. investigators posed as foreign importers. Executive Recycling offered to sell 1,500 CRT computer monitors and 1,200 CRT televisions to the GAO's fictitious broker in Hong Kong. But Executive Recycling was not alone. The GAO report found that another 42 American companies were willing to do the same.

Since 60 Minutes first broadcast this story, federal agents executed a search warrant at the Executive Recycling headquarters as part of an ongoing investigation.