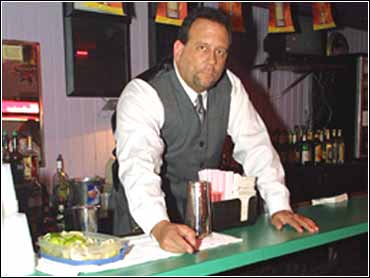 Three men spewed anti-American sentiments in a bar and talked of impending bloodshed the night before the terrorist attacks on New York and Washington, a Daytona Beach strip club manager interviewed by the FBI said Thursday.

"They were talking about what a bad place America is. They said 'Wait 'til tomorrow. America is going to see bloodshed,"' said John Kap, manager of the Pink Pony and Red Eyed Jack's Sports Bar. Kap said they made the claims to a bartender and a patron.

Federal agents were investigating on several fronts in Florida on Thursday after searching homes and rental car documents and poring over flight school student records across the state.

The Boston Globe reported on its web site Thursday that it had obtained a copy of the complete manifest list of the planes hijacked from Boston.

The Globe said according to the manifest, Mohamed Atta, one of the suspected terrorists, was assigned seat 8D in business class on American Airlines Flight 11, directly across the aisle from Hollywood producer David Angell and his wife, Lynn, who were in seats 8A and 8B, respectively. Seated next to Atta in seat 8G was Abdul Alomari. FBI investigators have searched Alomari's home in Vero Beach.

The Globe reported the passenger list for United Air Lines Flight 175 shows that Marwan Alshehri got on the plane that left Boston and slammed into one of the Manhattan skyscrapers 15 minutes after Flight 11. An FAA pilot directory information spelled his name Marwan Alshehhi.

In Daytona Beach, Kap said he told FBI investigators the men in his bar spent $200 to $300 apiece on lap dances and drinks, paying with credit cards. Kap said he gave the FBI credit card receipts, photocopied driver's licenses, a business card left by one man and a copy of the Quran - the sacred book of Islam - that was left at the bar.

The FBI asked him not to reveal the men's names publicly, Kap said. He said they lived in three central Florida communities between Daytona Beach and Orlando. FBI Miami spokeswoman Judy Orihuela did not immediately return a phone call.

While investigators pieced together evidence, two former Florida flight school students were identified by German authorities as terrorists aboard the two planes that smashed into the World Trade Center.

Hamburg investigators said Atta, 33, and Alshehhi, 23, had studied at the Technical University in Hamburg and were from the United Arab Emirates. Both men received pilot training at Huffman Aviation, a flight school in Venice, Fla., where FBI investigators are examining student records.

"We were completely stunned and shocked," Brian George said Thursday. "My father said that if he didn't have a family to support he would stop teaching tomorrow. To think that someone would take what he taught them and turn it into a weapon"

Both men trained on a Boeing 727 full-motion simulator, he said.

FBI and local law enforcement investigators combed a room at the Panther Motel and Apartments in Deerfield Beach for clues related to the attacks.

The FBI issued a bulletin for authorities to look out for a silver 1996 Chrysler Plymouth and its possible driver Amer Kamfar, a flight engineer who listed a Saudi Airlines post office box as his address in FAA records and lived in Vero Beach, about 70 miles north of West Palm Beach.

Agents searched four Vero Beach homes, including Bukhari's and the house next door, where another Flight Safety student, Alomari, lived with his wife and four children.

An apparent relative of Bukhari, Ameer Bukhari, was a student pilot at Flight Safety Academy when he was killed in a mid-air collision exactly a year before Tuesday's attack.

Kamfar, 41, was listed as living at the same address as Alomari at different times. He previously was issued a driver's license in Venice, Calif.

Landlord Lonny Mixel said Thursday that Alomari arrived in July 2000 and told him he was a commercial pilot from Saudi Arabia and was in Vero Beach to attend Flight Safety Academy. Alomari said he would be out of the house by the end of August. Then he pushed the date back until Sept. 3 and moved out that day.

The school does not have simulators for Boeing 767 and 757 aircraft such as the ones involved in Tuesday's attacks, Ritchie said.

Thomas Quinn, a New York-based spokesman for Saudi Arabian Airlines, said many of the airline's pilots came to the United States for flight training. Foreign students must be sponsored by an airline to attend Flight Safety.

The newspaper said Al Shehri was listed as a passenger on the American Airlines flight from Boston and had earned a bachelor's degree in aeronautical science, the university's commercial pilot training degree, and is listed as having a commercial pilot's license.

Embry-Riddle said on its web site that David M. Charlebois, a 1983 graduate, died while serving as first officer on American Flight 77, which rammed into the Pentagon.

By Brendan Farrington © MMI The Associated Press. All Rights Reserved. This material may not be published, broadcast, rewritten, or redistributed