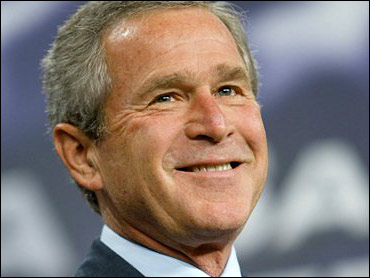 A day after their one and only face-to-face debate, the vice presidential candidates took their skirmish on Iraq and domestic issues out on the campaign trail, while a new report undercut the Bush administration's main justification for invading Iraq.

Both Vice President Dick Cheney and Democratic Sen. John Edwards traveled to the key swing state of Florida following their spirited debate Tuesday night in Cleveland. Post-debate polls were split over who came out ahead, but each side claimed victory in the battle for momentum.

Campaigning in West Palm Beach, Fla., Edwards renewed his criticism that the Republican ticket won't acknowledge "the mess in Iraq" or trouble with jobs and the economy.

For his part, Cheney questioned whether the Democratic challengers were capable of sustaining the war on terrorism.

"John Kerry and John Edwards cannot with tough talk obscure a record that goes back 30 years that had him on the wrong side of virtually every issue that dealt with national security," Cheney told a rally in Tallahassee.

Kerry was in Englewood, Colo., preparing for the second presidential debate on Friday, but President Bush offered a sharp if familiar critique of his rival during a stop in the battleground state of Pennsylvania.

"In the war on terror, Senator Kerry is proposing policies and doctrines that would weaken America and make the world more dangerous," the president told cheering supporters in Wilkes-Barre, Pa.

The president's main argument for invading Iraq suffered a serious blow Wednesday when the top U.S. arms inspector reported that he found no evidence that Iraq produced any weapons of mass destruction after 1991. He also concluded that Saddam Hussein's weapons capability weakened during a dozen years of U.N. sanctions before the U.S. invasion last year.

The inspector's report could boost Kerry's contention that the White House rushed to war based on faulty intelligence and that sanctions and U.N. weapons inspectors should have been given more time.

But the president continued to defend his rationale for war. "There was a risk, a real risk, that Saddam Hussein would pass weapons or materials or information to terrorist networks," Mr. Bush said in Pennsylvania. "In the world after Sept. 11, that was a risk we could not afford to take."

The presidential rivals meet again Friday night at Washington University in St. Louis to take questions from voters. After Tuesday's vice presidential debate, the Bush camp claimed that a strong performance by Cheney helped break momentum that appeared to be going Kerry's way. Democrats said Edwards more than held his own.

"I thought it was another win for the Kerry-Edwards team. I thought John Edwards showed real strength, conviction, he was in command of all the facts, in control of the debate," Democratic Party chairman Terry McAuliffe told AP Radio.

McAuliffe unveiled a post-debate "reality check" video on the DNC Web site Wednesday that shows video clips of Cheney contradicting statements he made during the debate. "Someone who lies about the little things will lie about the big things too," he told reporters in a conference call.

Both candidates got some encouragement from post-debate polls.

A CBS News poll of 178 uncommitted voters found that 41 percent said Edwards won the debate, versus 28 percent who said Cheney won. Thirty-one percent said it was a tie. The poll had a seven point margin of error.

Cheney fared best in a poll of 509 debate watchers, a Republican-leaning group, done by ABC News that gave him the edge on a stronger performance, by 43 percent to 35 percent who said Edwards won. The poll had a margin of error of 4.5 percentage points.

At one point, Edwards accused the administration of "not being straight with the American people" about conditions in Iraq and of presiding over the biggest job losses since the Depression.

"Your facts are just wrong," Cheney responded. Later, he told Edwards, "Senator, frankly, you have a record in the Senate that's not very distinguished."

Edwards, referring to Cheney's long record of public service, asserted: "One thing that's very clear is that a long resume does not equal good judgment. I mean, we've seen over and over and over the misjudgments made by this administration."