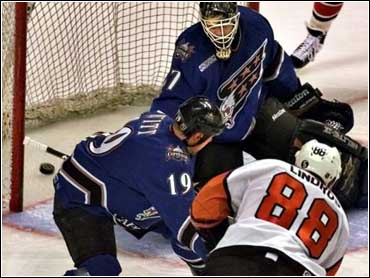 The Philadelphia Flyers made sure they gave Roger Neilson a victorious sendoff.

Mark Recchi scored twice, and Eric Lindros and Chris Therien each added goals as Philadelphia beat the Washington Capitals 4-2 Saturday night. After the game, Neilson announced he is leaving the team to undergo massive chemotherapy treatments that will prepare him for a bone marrow transplant.

"It wasn't my decision. It was the doctors," said Neilson, who is likely to be out until at least mid-April or through the first round of the playoffs.

Neilson, 65, was diagnosed with multiple myeloma, a rare form of bone cancer, on Dec. 9. He begins a new phase of treatment Monday, including aggressive chemotherapy and the removal of bone marrow cells. Assistant Craig Ramsay will take over in Neilson's absence, with help from assistant Wayne Cashman and minor league coach Mike Stothers.

"Roger has said that once I have the team, it is my team," said Ramsay, who coached the Flyers for two games last season when Neilson was suspended. "Roger has a wonderful way of letting people work. I think we're in good shape."

The Flyers stayed ahead of Washington for fourth in the Eastern Conference playoff race.

"Mark Recchi said, `Let's go out there and win this game for Roger. It's his last game for a long time,"' goalie Brian Boucher said. "I think we were inspired by that."

"I was not really enamored with the twgoals to start the first period," Washington coach Ron Wilson said. "That really put us in a hole."

Chris Simon made it interesting with his 20th goal with 2:53 left, cutting it to 3-2. Boucher, starting yet another important game instead of John Vanbiesbrouck, got a skate on Ken Klee's shot with a minute left.

Recchi then scored an empty-net goal, his 23rd, to seal the victory. Neilson paused for a moment and looked at the ice before walking quickly down the tunnel for the last time this regular season.

"We're losing Roger," Lindros said. "We knew it was going to happen. We've addressed it in our minds. We know he's going to be away for an extended period of time."

"Our thoughts aren't in a selfish state. We're not, you know, `Where is he? Why isn't he with us?' It's more that we're praying that he gets over his hurdle and he gets better."

Neilson said, "It's a close team. We've got a real good bunch of guys, and it's nice knowing you've got that support."

It was a much-needed positive effort from the Flyers, who were 3-6-5 since Jan. 14 and 0-6-3 when scoring two goals or less. The elusive third goal came from Therien, his third of the season, on a fluke play 4:28 into the third.

Therien skated up the middle as a power play expired and dumped the puck in. Olaf Kolzig made the save, but Therien poked the puck into the net while Kolzig was trying to clear.

Philadelphia was 0-for-5 on the power play, extending its drought to 0-for-19.

Neilson told the team of his decision in what he described as a minute-long meeting after the morning skate. Though he courageously stayed behind the bench during the first waves of chemo, it was known all along that he would have to leave the team for the stronger treatments.

"You mean, now that we're on to the big stuff?" Neilson quipped.

The Flyers, desperately needing goals during their slump, put two past Kolzig in the first 2:16. Lindros scored his 24th on the Flyers' first shot 55 seconds in. He took a pass from Keith Jones that bounced off Brendan Witt's skate and beat Kolzig to make it 1-0.

With 2:16 gone, Recchi was set up by Simon Gagne and put in his own rebound for his 22nd goal to make it 2-0. The Flyers had two goals on three shots and had the Capitals reeling.

Boucher was shrp despite facing only five shots in the first period and one in the first half of the second period. The rookie made a sliding stop on Klee's one-timer from the left circle six minutes in.

With 9:10 left in the first, Joe Reekie was called for obstruction-hooking on Lindros, who got an unsportsmanlike conduct minor for "diving."