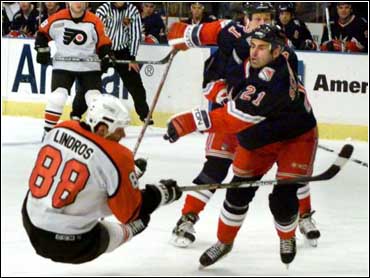 Facing the impending departure of Roger Neilson has weighed on the minds of the Philadelphia Flyers. Now that he is no longer with the team, the Flyers are ready to show just how good they are.

John LeClair's 30th goal midway through the third period capped a two-goal rally Sunday night as the Flyers beat the New York Rangers 3-2 in the first game without their cancer-stricken coach.

"It was a big win for us," said coach Craig Ramsay, leading the team in Neilson's absence. "The guys really played hard in the third."

Neilson, 65, has multiple myeloma a rare form of bone marrow cancer and will be away for the remainder of the regular season and at least through one round of playoffs while undergoing treatment.

"It's really been incredible," Ramsay said. "I can't even imagine how anyone could have done a better job when he made the final talk to the players about him being out and not being able to come along."

Neilson wanted to keep coaching through this week, but doctors advised against it.

"I think we were well prepared for this," Ramsay said. "Maybe it came a little bit sooner, but we were prepared for what was going to happen. Roger's done a magnificent job from Day 1 of finding out about the disease, getting everybody ready."

Neilson's last game behind the bench was a 4-2 victory Saturday over Washington.

"We've had discussions and we really wanted to get out of this (slump)," said Mikael Renberg, who scored at 4:07 of the third to tie it at 2.

"It's a positive feeling within the team now," Renberg said. B>"Of course, we wish Roger all the best and we think about him, but we know we have to look forward now."

Renberg did notice some changes with Ramsay calling the shots.

"Everybody had a chance to get into the game," Renberg said. "In crucial situations, at the end of periods, he used our big guys but that's OK."

LeClair became just the third Flyers player to record five straight 30-goal seasons when he put Philadelphia ahead 7:41 into the final period.

Keith Jones passed to LeClair at the right of Rangers goalie Kirk McLean and LeClair knocked it in.

The goal came just 3:34 after Philadelphia tied it.

New York, clinging to the final playoff spot in the Eastern Conference, is in an 0-4-1 stretch. The Rangers, one point ahead of ninth-place Buffalo, are 1-5-2 since the All-Star break and only have 21 games left to straighten things out.

"As you get into March, every game is critical," Rangers forward Tim Taylor said. "There's got to be an urgency. If there's not an urgency, we're in trouble."

The Flyers, who own the league's top power play, are 0-for-20 including 0-for-3 Sunday with the man-advantage spanning five games.

But Philadelphia got the tying goal 12 seconds after a penalty to Petr Nedved expired. Valeri Zelepukin waited behind the Rangers net and found an opening to get the puck to Renberg, who tipped in his eighth goal.

"It was a good pass from Zelly," Renberg said. "I just put it on the net and it went in."

Flyers goalie John Vanbiesbrouck had shut out the Rangers in two previous meetings this season, but New York finally solved him.

Vanbiesbrouck, who has lost his grip as the Flyers top goalie and been criticized for allowing soft goals, gave up another one that gave the Rangers a 2-1 lead.

Rookie Mike York skated in and slipped a shot past Vanbiesbrouck's left pad at 13:56. York leads NHL rookies with 19 goals.

The Flyers grabbed a 1-0 lead in the first on Daymond Langkow's 13th goal at 11:30. Langkow has scored in three of Philadelphia's last five games.

Radek Dvorak tied it on a spectacular short-handed breakaway, started by Nedved, at 7:59 of the second.

From behind his own net, Nedved lifted the puck down the ice. Dvorak gained control in the Philadelphia zone, stick-handled deftly around defenseman Chris Therien and deked to beat Vanbiesbrouck between the pads.

Dvorak, who has 14 goals, has scored twice and set up five others in six games.

The score stopped a scoreless drought of 147:59 the Rangers had against Philadelphia and Vanbiesbrouck this season.

McLean made 28 saves in place of Mike Richter, who missed his fourth game since injuring his knee during All-Star weekend.

Vanbiesbrouck stopped 30 shots, including a few in the last 30 seconds after McLean was pulled for an extra skater.