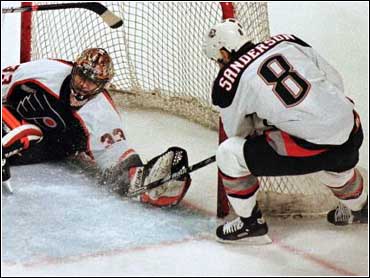 The Philadelphia Flyers have been bombarding goaltenders for the last 12 games with little to show for it.

They finally awoke from their scoring slump Saturday as John LeClair's goal with 2:32 left in overtime gave the Flyers a 3-2 victory over the Buffalo Sabres.

LeClair's goal on a wraparound backhander came on the Flyers' 42nd shot of the game. Philadelphia won for only the third time in 12 games despite outshooting the opposition each time.

"We can't be snake-bitten forever," LeClair said. "That's our feeling here. We wanted to put as many shots on the net as possible. We had a lot of good scoring chances. Three of them was enough to win."

"The way things have been going, to win a game like that after we feel we outplayed a team, it's a big relief."

The Flyers outshot Buffalo 42-23, including 18-4 in a scoreless third period. Flyers rookie Brian Boucher made 21 saves as he started in place of struggling John Vanbiesbrouck.

Boucher made a solid, glove save on a shot by Miroslav Satan with 2:13 left in the game. But he allowed a short-side goal by Stu Barnes 6:37 into the second period that gave Buffalo a 2-0 lead.

Boucher has started two of the three games since the All-Star break amid speculation the Flyers are shopping for goaltender. Vanbiesbrouck has struggled in his last seven starts with a 2.67 goals-against average and an .897 save percentage.

"Beezer is our No. 1 guy," said Boucher, who entered the game with a 2.02 goals-against average in just 17 games. "To hear the things and know that your partner's going through a tough time like that, I want to be there to help him. Sure, I want to play, too. But by no means when I get in there do I think it's my job."

"Hopefully, Beezer gets back on track, we get into the playoffs and go from there."

Martin Biron was spectacular in goal for Buffalo, which had a three-game winning streak snapped. Biron stopped 39 shots, including a sensational, diving save on a shot by Andy Delmore 7:28 into the second period, preserving a 2-0 lead. Biron was fighting for the puck in the corner when it bounced out to Delmore, who wristed a shot as Biron came sliding across the crease to swat it away in mid-air.

"I didn't know why my stick was three, four feet up in the air," said Biron, who started in place of Dominik Hasek, who was being rested in the front-end of back-to-back games.

Biron made another huge save 8:10 into the third period, stopping a blast by Eric Lindros from the left circle to maintain a 2-2 score. He sticked aside a blast by Eric Desjardins on a 3-on-2 break minutes later.

"Their big guys were right in front of the net all the time," Biron said. "It's tough on everybody."

The Flyers' best opportunity to win the game in regulation came with slightly over a minute left in the third period. Keith Jones emerged from a scramble in front of the net as two Sabres, including Biron, were sprawled across the ice. But Jones' shot sailed over an empty net.

"We are still having trouble scoring," Flyers coach Roger Nielson said. "We kept up the pressure all of the game and that was to our credit."

Dan McGillis cut the score to 2-1 on a power play goal 9:49 into the second period. The Flyers tied it when Daymond Langkow deflected a shot by Desjardins from just inside the blue line with 6:08 left in the second period.

Buffalo took a 1-0 lead with 6:21 left in the first period when Geoff Sanderson whacked a rebound past Boucher. Buffalo, which had only one shot through the first nine minutes of the game, fired five shots during a power play before Sandrson capitalized seven seconds after the man-advantage had elapsed.

Desjardins prevented a Sabres' goal early in the first period by stopping Vladimir Tsyplakov's rebound shot after Boucher got caught out of position.

Lindros got an assist on McGillis' goal, giving him 651 points as a Flyer, moving him ahead of Tim Kerr into fifth place on the team's career scoring leaders.

Flyers center Keith Primeau left the game in the first period after cracking his left rib. His status was listed as day-to-day.

Jason Woolley's assist on Barnes' goal was his 100th point as a Sabre in his 200th game with Buffalo.