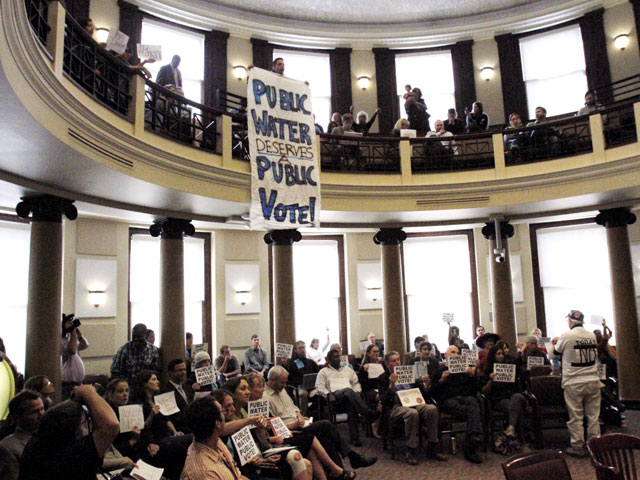 PORTLAND, Ore.Portland, Oregon officials had hoped to add fluoride to the city's water supply, after the City Council approved a plan last September in the largest city to hold out on fluoridation.

On Wednesday, however, Portland's mayor conceded defeat in the measure following a public vote.

Mayor Charlie Hales supported fluoridation and said "the measure lost despite my own 'yes' vote."

"That's sure disappointing, but I accept the will of the voters," he said in a statement.

If the early returns hold up, "then Portlanders spoke out to value our clean water and ask for better solutions for our kids."

Voters in Portland twice rejected fluoridation before approving it in 1978. That plan was overturned two years later, before any fluoride was ever added to the water.

When the City Council voted last year to add fluoride to the water supply that serves about 900,000 people, opponents met the news with protests and quickly gathered enough signatures to force a vote on the subject.

Rejection of the proposal would keep Portland the largest U.S. city without fluoride in the water or with plans to add it. San Jose, Calif., - -which is larger than Portland -- has been working to add fluoride to its water supply.

Voters had weeks to make their choice in the mail-ballot election. By Tuesday it was too late to rely on the postman, so drop boxes were placed across the city to accommodate those who waited until the final day.

"We were still getting ballots from drop sites close to 8 p.m.," said Eric Sample, a Multnomah County elections spokesman. That meant a "pretty darn long night" of vote counting that likely would stretch into Wednesday, he said.

Supporters and opponents of fluoridation raised hundreds of thousands of dollars and traded accusations of sign-stealing and shoddy science in an election that has been the city's most contentious of the 21st century.

Portland's drinking water already contains naturally occurring fluoride, though not at levels considered to be effective at fighting cavities. Backers of fluoridation say adding more of it to the water is a safe, effective and affordable way to improve the health of low-income children whose parents don't stress proper nutrition and dental hygiene.

"Fluoridation's effectiveness in preventing tooth decay is not limited to children, but extends throughout life, resulting in fewer and less severe cavities," Surgeon General Dr. Regina Benjamin, said in April during the 2013 National Oral Health Conference in Huntsville, Ala. "In fact, each generation born since the implementation of water fluoridation has enjoyed better dental health than the generation that preceded it."

This year marks the 68th anniversary of fluoridation - the first U.S. city to adjust the fluoride levels in its water supply was Grand Rapids, Mich. on January 25, 1945, according to the American Dental Association

The association estimates about 72 percent of the U.S. population is served by fluoridated water systems.

Opponents describe fluoride as a chemical that will ruin the city's pristine water supply, and they argue that adding it would violate an individual's right to consent to medication.

Although most Americans drink water treated with fluoride, it has long been a contentious topic. In the 1950s, fluoridation was feared as a Communist plot. Today, people worry that its effect on the body has not been sufficiently examined.

"I don't want chemicals in my water," Sarah Lazzaro said after voting Tuesday. "I know that there are really no known health risks with it, but there's a lot of things we find out later in life really do have health risks."

The issue re-appeared on Portland's radar late last summer, when health organizations that had quietly lobbied the City Council for a year persuaded the panel to unanimously approve fluoridation by March 2014.

Days before the vote, 227 people - most of them opponents - signed up to testify at a public hearing that lasted 6 1/2 hours. When their objections weren't heeded, they quickly gathered tens of thousands of signatures to force Tuesday's vote.