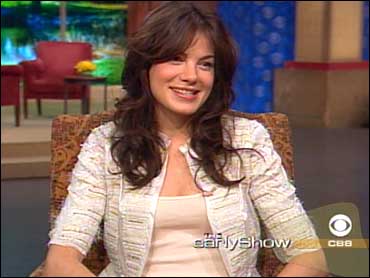 "It's been a pretty incredible year," Monaghan to co-anchor Hannah Storm on The Early Show Friday. "But it seems that every job that I get feels like a big breakout thing for me, because I've never had it before, obviously. But this year, in particular, has been very special."

Monaghan said fate was smiling on her when she landed her 'Mission: Impossible III' role.

"(Mission: Impossible III Director J.J. Abrams) saw an audition tape that I did for "Constantine," which ironically was a film that I was cut out of.

"So, when he called, on some level, I was feeling a little bit validated, I must say. And at the end of the meeting, he asked me to audition with Tom Cruise. Of course I jumped at the chance, then immediately started shaking in my boots. But the three of us auditioned, and I got the job.

"(Cruise) was actually doing a re-shoot for 'War of the Worlds' so, in that one day, I met Steven Spielberg and Tom Cruise. I was so nervous.

"And, immediately when you meet Tom, he just kind of throws your — all your fears and throws them out the window. … He's just such a super guy. Thank God, because I was able to give a decent audition and they hired me."

She said she noticed "just how committed (Cruise and Hoffman) are, really, to each role that they do. These are actors that I've admired for a long time, been fans of their work, and they always really just go the extra mile, and create unique characters. … They really are intense."

Asked about her kissing scenes with Cruise, Monaghan readily conceded they were "not bad. Could have been much worse, I suppose!"

She said she doesn't think Cruise and his real-life love, Katie Holmes, had met when "Mission: Impossible III" began filming, but she did meet Holmes before it ended.

Monaghan hails from Winthrop, Iowa, population 762. She said there's a theater 45 minutes to an hour away, and a big convoy is heading there this weekend to see their homegrown star in "Mission: Impossible III."

"Everyone's so thrilled for me!" she told Storm.

Next up for Monaghan? A film called "Gone, Baby, Gone," which marks Ben Affleck's directorial debut: "I'll be starring alongside Ed Harris and Casey Affleck."