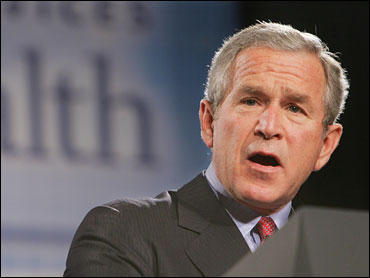 Sustained person-to-person spread of the bird flu or any other super-influenza strain anywhere in the world could prompt the United States to implement travel restrictions or other steps to block a brewing pandemic, say federal plans released Wednesday.

If a super-flu begins spreading here, states and cities will have to ration scarce medications and triage panicked patients to prevent them from overwhelming hospitals and spreading infection inside emergency rooms, the plan says.

It provides long-awaited guidance to the front-line local officials urging them to figure out now how they would take steps to prevent such a crisis scenario, and exhorts officials to practice their own plans to make sure they'll work.

Pandemics, or worldwide outbreaks, strike when the easy-to-mutate influenza virus shifts to a strain that people have never experienced before, something that happened three times in the last century.

It's impossible to predict the toll of the next pandemic, but a bad one could infect up to a third of the population and, depending on its virulence, kill anywhere from 209,000 to 1.9 million Americans, the Bush administration's new Pandemic Influenza Plan says.

The illness would spread fastest among school-aged children, infecting about 40 percent of them, and decline with age, the plan estimates. It puts the health costs alone, not counting disruption to the economy, at $181 billion for even a moderately bad pandemic.

It's also impossible to predict when the next pandemic will strike. But concern is rising that the Asian bird flu, called the H5N1 strain, might trigger the next one if it eventually becomes easily spread from person-to-person.

With a public increasingly jittery about the H5N1 spread among birds and a drumbeat of criticism that the nation is woefully unprepared, President Bush on Tuesday outlined a $7.1 billion strategy to get ready for the next pandemic. The administration strategy includes:

"The president has made it clear that he believes we need the capacity in the future, no matter what the strain, to have a vaccine for every arm in America," said Health and Human Services Secretary Michael O. Leavitt Tuesday told
CBS News (video)
.

CBS News correspondent John Roberts reports that while bird flu is widespread in animals, human infections have been extremely rare.

While there is no indication of a looming epidemic anywhere in the world, health experts say the potential for a global pandemic does exist.

"When you're dealing with something as potentially as serious as this public health hazard, then you really have to assume the worst case scenario," Dr. Anthony Fauci with the National Institutes of Allergy and Infections Diseases, told CBS News.

More than 40 percent of doctors surveyed believe the government and the health care industry are unprepared to deal with a bird flu outbreak, according to a nationwide survey of doctors.

"Physicians had about the same degree of concern for the preparation of the medical community as they did for the federal government," Prof. Christopher Borick of Muhlenberg College in Pennsylvania told CBS News correspondent Peter Maer.

Bird flu has been documented in Asia and has spread to Europe but has not reached the United States, the president said. "Our country has been given fair warning of this danger to our homeland and time to prepare," he said.

"The first part of our strategy is to detect outbreaks before they spread across the world," whether caused by the worrisome Asian bird flu or some other super-strain of influenza, Mr. Bush said.

It will also stress a new method of manufacturing flu vaccines - growing the virus to make them in easy-to-handle cell cultures instead of today's cumbersome process that uses millions of chicken eggs - as well as incentives for new U.S.-based vaccine factories to open.

That vaccine improvement will take years to implement, and the details released Wednesday by the Department of Health and Human Services stress that early on, the public will be depending on scarce supplies of anti-flu drugs and stockpiled vaccines.