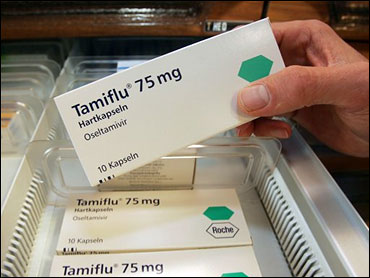 Swiss drugmaker Roche Holding AG said Monday it has chosen 12 potential partners for the production of Tamiflu and granted one sublicense for the antiviral drug to Shanghai Pharmaceutical.

Basel-based Roche said it compiled the shortlist of potential partners, which it did not identify, after evaluating around 200 applicants interested in helping with certain steps in the manufacture of Tamiflu. It didn't say how many it would finally choose.

Roche said it would mainly use the partners, which include major pharmaceutical makers, large generic manufacturers and specialty chemical producers, as backups, to meet specific regional needs and to prepare for any large additional government orders in the future.

"We are now also in the position to have a backup supply in case of an emergency," said David Reddy, who heads Roche's influenza pandemic task force.

Roche has come under international pressure to ease its monopoly grip on the manufacture of Tamiflu, which is considered the most efficient treatment in case of an outbreak of human influenza caused by a mutation of the bird flu virus. The company has been pressed to step up production, cut prices and allow other companies to make copies of the drug.

Roche said it will now evaluate the potential partners' specific skills, the quality of their production and their delivery speed before making the final choice. "We will then choose among the companies to help us with certain steps in the production process such as fermentation or alcoholic granulation," said Roche spokesman Daniel Piller.

Roche has pledged to increase the production of Tamiflu by nearly sixfold, planning to make 300 million treatments annually by 2007 in order to meet government orders amid fears of a flu pandemic.

"They are allowed to and they will produce the drug from the beginning to the end," said Piller.

Roche said it already could produce the 300 million annual treatments with its existing partners such as Mylan Laboratories Inc. of Pittsburgh or Israeli drugmaker Teva Pharmaceutical Industries. The making of oseltamivir is considered very complicated.

So far, some 50 companies around the world have bought or ordered supplies of Tamiflu for pandemic stockpiles. But orders for 2007 are far below Roche's production capacity of 300 million.

For example, Roche has not yet received any large orders from the United States, although President Bush has proposed stockpiling anti-flu drugs Tamiflu and GlaxoSmithKline PLC's Relenza for 81 million people. And U.S. Department of Health and Human Services Secretary Michael Leavitt has called for a Tamiflu stockpile to treat 20 million Americans. So far, the United States has only enough anti-flu drug doses in stock to treat 4.3 million people.

Tamiflu is not patent-protected in Thailand, the Philippines and Indonesia. As a result, local governments can purchase and manufacture oseltamivir at their discretion.