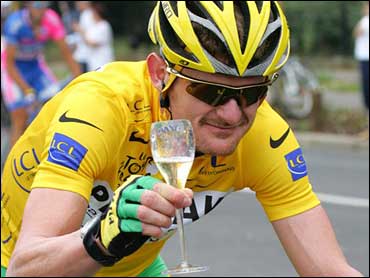 Instead, he told the press he is heading for the hospital where he hopes to get relief from the constant pain caused by an injury to his hip sustained during a 2003 training crash.

"Mechanically, it works fine -- it's just the pain is starting to be unbearable," Landis recently told the Atlanta Journal-Constitution.

That pain is the result of osteonecrosis -- also known as avascular necrosis (AVN). It's the same condition that disrupted the career of baseball and football star Bo Jackson.

Osteonecrosis develops when blood vessels that feed bones are injured, destroyed, or blocked. This causes a lack of blood circulation to the bone, which can lead to bone death. In Landis' case, the damage reportedly occurred in conjunction with a hip fracture he suffered in 2003.

"When you are young and strong it takes a powerful force to cause a hip to break. And because of that, often key blood vessels in the area can be injured as well," says James Urbaniak, MD, professor of orthopaedics at Duke University Medical Center in North Carolina.

While doctors say some patients may generate new blood vessels to resupply the area naturally, when that doesn't happen, bone can quickly begin to break down.

In Landis' case, problems were complicated further since the area normally fed by the injured vessels was the femoral head, or tip of the thigh bone, which sits directly inside the hip socket.

"So now, instead of having a smooth, spherical shape to the end of that bone, allowing it to move freely inside the socket, it begins to crumble, and becomes irregularly shaped," says Bronson.

As a result, he says movement becomes like "trying to put a square peg in a round hole."

Urbaniak tells WebMD that over time the socket also can become damaged so that nearly every movement of the leg causes bone to rub against bone. This not only results in significant pain, but in Landis' case, a muscular imbalance that also caused one leg to become shorter.

In most instances, doctors say a secondary arthritis usually develops as well, further increasing pain, and facilitating the need for hip replacement surgery.

"Some people come to replacement surgery as the result of pain from the necrosis alone, others have it when arthritis secondary to the crumbled bone sets in," says Bronson.

In the surgery that Landis reportedly plans to have this fall, doctors will likely replace the end of the crumbling thigh bone with a smooth, artificial tip. They will then remove the old, worn socket and replace that with a mechanical new one.

"The end result will be a smooth moving new joint that is pain-free," says Bronson.

Because the new "parts" are man-made, they don't require the blood supply that bone needs to remain healthy. So even if the blood deficiency to the area remains, the joint is no longer affected.

Did Cycling Wear Out the Hip?

While it may seem as if all that bike riding before and after the accident contributed or even caused Landis' problem, surprisingly, experts say this is not the case.

Moreover, he tells WebMD that continuing to ride may have actually helped the problem, allowing Landis to maintain a significant range of motion, which in turn allowed him to function better than if he were a couch potato.

Urbaniak tends to agree. "If you have a square peg in a round hole continually causing friction it's going to advance the problem, but that said, the continuous motion of the cycling may actually help lubricate the joint and in that way reduce some of the potential for damage," he says.

While it appears as if Landis' condition is related to his previous training injury, experts say there are other situations that can lead to osteonecrosis, which commonly occurs between ages 30 and 50. A past traumatic injury such as fracture or dislocation is a common cause for osteonecrosis.

Other Causes of Osteonecrosis

According to the National Osteonecrosis Foundation (NONF), some nontraumatic causes of osteonecrosis include extended use of steroids and other anti-inflammatory medications, alcohol abuse, radiation and chemotherapy, and certain medical conditions including lupus, sickle cell disease, HIV infection, and some cancers. Osteonecrosis can also occur from no known reason at all.

More importantly, however, when treated early on, it's possible to minimize the damage caused by this condition and put off, or even prevent, the need for a hip replacement.

One solution is a surgery Urbaniak developed in 1979 known as a "free vascularized fibular graft" (FVFG). In this procedure, he says, bits of bone and blood vessel are grafted from the lower leg and implanted into the area where circulation is compromised.

"It works in over 80% of patients -- and it can usually hold off a hip replacement for eight or 10 years, or sometimes indefinitely," says Urbaniak.

While there are no established drug treatments for osteonecrosis, NONF reports some medications are showing promise. They include bisophosphonates (used to treat the bone thinning disorder osteoporosis), drugs used to treat high blood pressure, as well as certain cholesterol-lowering and anticlotting medications.

Can Landis Return to Racing?

While no one is certain why Landis didn't treat the problem early on, what remains is his immediate need for hip replacement surgery.

And while the operation will clearly alleviate his pain, the question on everyone's mind is will it prevent him from returning to cycling.

Surprisingly, most experts say not only will he be able to ride competitively again, he could be back in the hot seat just months after surgery.

"Patients are out of the hospital in three days, on crutches for two weeks, using a cane for two to four weeks, which brings you to about a six-week recovery time," says Bronson.

At that point, he says, they are free to begin working out with exercises like swimming and riding a stationary bike.

"As long as there is no pounding on the joints, it's safe to begin activity," says Bronson. — And while he says outside bike riding is discouraged for three months because of the risk of falling, after that, regular cycling is not only allowed, it's encouraged.

"I would say that he could be back competing within six months," says Bronson.

Urbaniak agrees: "The prognosis for returning to competitive cycling is good. We let people get on the bike for rehab a few weeks after a total hip replacement and I would guess he could start back training again in six weeks or less, and competing within several months after that."

Some doctors say that Landis' new hip may last for many years – even if he continues to compete.

"A hip replacement used to have a life of 15 years or less, before it had to be replaced again, but now they are lasting up to 30 years. So depending on the age when it's done, a patient may never need another surgery," says Bronson.

Urbaniak is slightly more conservative, estimating around a 20- to 25-year lifespan for Landis' new hip, but says it's not so much the years, as what it is you do during that time that matters most.

"The relationship of activity to longevity is more important than age," he says.

But what about an active athlete like Landis? Doctors say that cycling won't put any undue stress on his new hip, so there's no fear of wearing it out too soon.

"If he was a triathelete -- and part of his training was running -- that would be a different story. But cycling does not cause pounding, and it's really only the pounding that has detrimental effects," says Bronson.

So maybe after the next win, Landis will be going to Disney World after all.