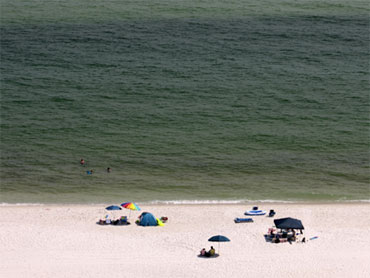 At the beachside restaurant The Dock, Nathan Wheeler worries his job of nine years could become another victim of the massive oil spill in the Gulf.

The leading edge of the oil slick is four miles from shore and edging closer, threatening more of the Gulf's pristine white beaches and Florida's $65 billion tourism industry.

"Even if I do keep my job here, business would be so bad I don't know if I could provide for my family with what we'd have," Wheeler said.

Escambia County officials in Pensacola told CBS News this morning that tar balls are now washing up on shore in the area.

Southwest winds are part of the problem. They're pushing the oil closer to the beaches that are the region's bread and butter.

A light sheen is now about 3.5 to 4 miles away and could reach shore by Saturday.

Emergency crews have laid 42 miles of boom in this northwest corner of Florida alone, around bays and wetlands. The local county government says it's spending millions out of its hurricane budget just to maintain them - because it doesn't trust BP to do it.

"I don't know that there's enough equipment on Earth to do what we need now," said emergency management director John Dosh.

With Mississippi, Alabama and now Florida in the spill's path, scientists have another concern: six different computer models all showing oil moving around South Florida and up the East Coast

"It was just shocking to see how fast it got up there - no one expected that," said
National Center for Atmospheric Research Synte Peacock.

Many here - tourists and locals alike - feel helpless and hopeless.

"The thought of all this is so depressing, I don't know if I want to come see it," said one man on the beach.

Relying on skimmers to keep this water from beaches, the Coast Guard has diverted more resources here to clean up the oil.

The Coast Guard has moved more resources into this area. There are more skimming boats as well as helicopters. The goal here is to remove some of this oil from the surface so that it doesn't get up to the beach. The booms won't survive the heavy surf.

One emergency official told Cobiella that he believes the oil's arrival here is inevitable.

Speaking on CBS' "The Early Show" this morning, Florida Gov. Charlie Crist said many steps are being taken to minimize the impact on his state.

"Number one, we've had boom in place for quite some time - over 250,000 feet of it as a matter of fact, trying to protect the most sensitive areas first, the marshes and estuaries. In addition, skimmers can help us, as well. I had a good conversation with Admiral Thad Allen after I took that helicopter tour and saw that this sheen was about 3.5, 4 miles off Pensacola Beach, requesting more skimmers so we can try to prevent it from coming on shore.

"Some news accounts this morning are indicating that there might be some tar balls on the beach," Christ said. "We hope that we can keep any more from coming on shore because we've got to protect our state and we're doing everything humanly possible to make that happen."

Crist said BP has provided millions to help the state both protect and market its beaches at a time when tourism faces a major hit, and he is asking for more.

"We did ask for more just yesterday, that's right. We've gotten an initial $25 million to help in the cleanup," he told "Early Show" anchor Erica Hill. "Then we got a second $25 million from BP in order to market the beaches in Florida. This past weekend, they were beautiful. I was in the panhandle the entire weekend for Memorial Day, and we kept it clean.

"What we want to do now is have another $50 million in order to be able to continue to try to prevent the tar balls from coming on shore, to clean the beaches in the eventuality that they do, and we're going to keep asking and asking and asking to get all the help we can."

When asked if he thought the military might be needed to deal with the situation, Crist said, "It certainly can't hurt. I think it's 'all hands on deck.' When you're dealing with a catastrophe of this magnitude, you want all the help from everybody that you can - to have the Coast Guard, our Department of Environmental Protection, our Division of Emergency Management, the federal government, the state government, those at the local level and volunteers, frankly.

"When this does come on the beach in Florida, we're going to have to rely upon our fellow Floridians to help us, and they're eager to do so. They love this state as much as I do and everybody wants to do everything they can to keep it as clean as possible."

To view the National Center for Atmospheric Research's computer model on the spread of oil, illustrating a likely dispersal pathway for roughly four months following the spill (assuming oil spilling continuously through June 20), click on the video player below.