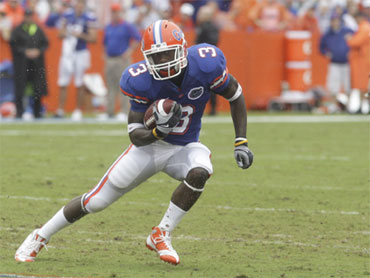 Florida receiver Chris Rainey has been charged with aggravated stalking, a third-degree felony.

Rainey was released from the Alachua County Jail on his own recognizance Tuesday and ordered to have no contact with the alleged victim.

The alleged victim also was in court with her mother and sister. The woman told Judge Denise R. Ferrero she does not fear Rainey but was concerned about retribution from the public following all the media attention.

She also asked for the charges to be dropped.

"I did not want to have him arrested," she said. "When the police came, I signed papers to not press any charges. I don't fear for my safety. ... People all over the country have been calling my cell phone. I'm not afraid of him. I'm more afraid of all the repercussions."

Florida has not announced what disciplinary action it will take against Rainey, though Gators' offensive coordinator Steve Addazio said Tuesday, "Chris Rainey is not a part of our team right now. That's really all I have to say on that."

According to Gainesville Police, Rainey sent the woman he dated on and off the last three years a text message that read, "Time to die," after leaving her home Monday night.

Officer Jesse Bostick said the woman fell asleep and missed a call from Rainey. Rainey went to her home, they talked and she told him to leave. According to Bostick, the woman got the text a short time later and called police.

The 10th-ranked Gators will likely be without their starting receiver at Tennessee on Saturday.

Rainey, a junior from Lakeland, Fla., has six receptions and a touchdown this season. He's also the team's primary punt returner. He missed the second half of Saturday's game against South Florida with a concussion.