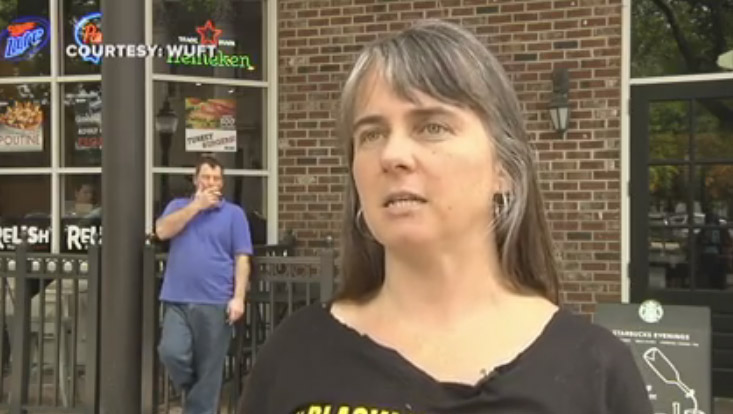 A Florida woman who was caught on camera Tuesday blasting Gov. Rick Scott at a Starbucks in Gainesville for cutting Medicaid and signing a bill to defund clinics like Planned Parenthood, is now responding to the viral video that garnered her national attention.

The woman, who has been identified as 39-year-old Cara Jennings, a former Lake Worth City commissioner, claims what was seen on video is not the whole story behind the confrontation.

In an interview with MSNBC, Jennings said she had been very upset about a bill Gov. Scott signed last week. She said the bill hurts low income women and their access to reproductive healthcare services.

"I've been thinking about that a lot so when Rick Scott walked in I thought 'oh great, this an opportunity to talk to the governor about the bill he signed,'" said Jennings.

She said what people can't see on the video, is that the interaction started out with Jennings turning to Scott and asking him why he signed the bill that, "is damaging for women's healthcare choices."

"He had a very politician, typical politician reaction. He lied," she said. "He said that he doesn't vote on any bills, which is technically correct, but misleading. Because he signed the bill into law. So then I corrected him that he might not have voted on it, but he signed it into law."

Jennings said she then proceeded to explain to the governor that his decision to sign the bill is damaging to low income women, like herself, who rely on public healthcare options.

Jennings said the governor then "very inappropriately" responded by telling her where to receive her healthcare, "As if I shouldn't make that decision myself."

Jennings said, from there, things started to escalate.

That escalation was caught on camera.

"You cut Medicaid, so I couldn't get Obamacare," Jennings yelled at Scott. "You're an a**hole! You don't care about working people."

When a woman with Scott tried to step in to deescalate the situation, Jennings dismissed her and turned her attention back to the governor.

"You should be ashamed to show your face around here," she yelled at him.

Scott, responding to Jennings' rant, said he was responsible for creating a "million" jobs in the state. Scott then looks down at his cellphone, and continues to try and place his order.

"A million jobs?" Jennings yells back, looking around the Starbucks. "Great! Who here has a great job? Or is looking forward to finishing school? Do you really feel like you have a job coming up?"

Scott leaves, seemingly without a coffee in hand, his entourage following close behind.

Jennings said when she saw the video posted online, she really didn't think much of it.

"I thought 'oh that's interesting that someone captured that interaction with the governor,'" she said. "I had no idea it would go viral."

And she added that overall, people reaction's to the video have been very positive.

"I think that's because across the board people support Planned Parenthood and wan't women to have good access to healthcare," she said.

Her entire interview can be seen here: