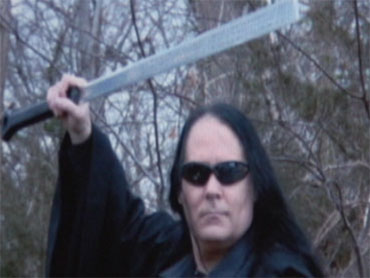 Sharkey, 45, spent Friday on a Greyhound bus with his new fiancee, Audrianna Foster, a 19-year-old girl from Ohio he met online. She too believes she is a vampire, or vampyre.

"I haven't dated a girl older than 19 since 2006," said the Tampa man as his 19-year-old daughter and his 2-year-old grandson met him at the Greyhound station. "It's good to be me."

"The Impaler" claims he's a direct descendent of Vlad II the Impaler, better known as Dracula.

He has scheduled a Monday press conference in Tampa to announce his plans to file paperwork to run for President of the United States in 2012. He recently switched his party affiliation from Independent to Republican so he can run with the G.O.P.

In an extended interview with WTSP, Sharkey shared well-thought-out opinions on capital punishment, the abortion issue, and veterans issues. However, he also bragged about having numerous teen-aged girlfriends in recent years.

The girls have also provided several skeletons in Sharkey's closet.

He's accused of "brainwashing" a 16-year-old in Minnesota. The two were engaged until last month. Her family now has a restraining order against Sharkey and claims his texts to her violate it.

He reportedly admitted to harassing another 16-year-old Minnesota girl online in 2009.

He was arrested in Tennessee several years ago and is currently on probation from Indiana after he was found guilty in 2009 of intimidating a judge. He served six months in a Marion Co. jail before his release. Sources confirm the Secret Service has had to keep him on its radar, since he moves around the country.

Sharkey was once on the Executive Committee of the Hillsborough Co. Republican Party (HCRP) in the 1990s, but A.J. Matthews, HCRP State Committeeman, says he didn't show any of the extreme behaviors he's exhibiting now.

"He does believe in Republican values," Matthews said. "Is he going to make a big splash with his current identification of being a vampire? That's up to the voters to decide."

Matthews said he'd help Sharkey with campaign basics, just like he would any Republican candidate. But he's been trying to advise him to focus on mainstream issues and away from the extreme behaviors.
Sharkey, meanwhile, continues to develop a movie on his campaign, "The True Impaler."