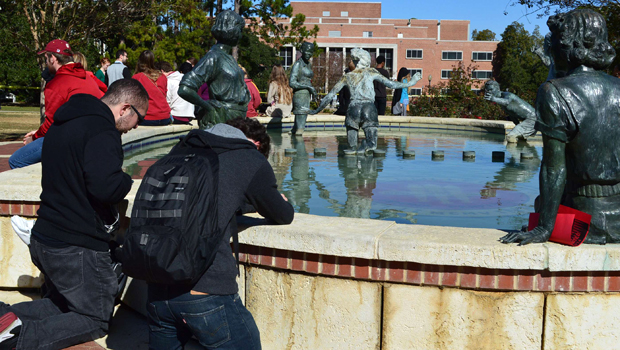 There is also indication, according to police records in New Mexico that he was mentally distressed.

May was fatally shot early Thursday after he shot three people at FSU's Strozier Library. Two are hospitalized and one has been released. One of the victims was identified as Nathan Scott, a library employee. He was shot in the leg but is listed in good condition. The names of the other two victims have not been released.

At a Thursday afternoon press conference, Tallahassee police chief Michael DeLeo said May graduated from Florida State in 2005 and Texas Tech Law School in 2009. He had recently moved back into the area about three weeks ago.

Officials know of no motive May would have had behind the shooting, but DeLeo said May had journals and videos saying he feared being targeted and wanted to bring attention to it. There was no indication that the three people who were shot were specifically sought out.

"We have no information saying anyone was targeted for a specific reason," said DeLeo.

However, last month an ex-girlfriend called police on May saying he was harassing her. The woman said May, who was living in Las Cruces, N.M., had developed a severe mental disorder, according to a police report, believing cops were after him, bugging his phone and putting cameras in his car and home.

She said May had been diagnosed with ADHD and was taking prescription medication for it; but the affliction had worsened over the prior few weeks. Police attempted to check on May at his home but he was not there. Future police checks on May were pending, according to the report.

In an earlier incident in September, May complained to police that he thought he was being watched and that he believed surveillance cameras were in his residence and that he constantly heard voices coming through the walls talking about his activities. But he did not provide any evidence of the voices to the responding officer.

DeLeo said May moved back into the Tallahassee area about three weeks ago.

Abigail Taunton, who runs a foster home in the Florida Panhandle, told The Associated Press that May had recently been staying at a guest house she owns. She said police interviewed her husband, David, after the shooting.

"He's just a boy our kids grew up with that we let stay in one of our guest houses for a while," she said. "He's moving back home from Texas and we were trying to help him get on his feet.

Records show May was licensed to practice law in Texas and New Mexico. Taunton said he was planning to take the Florida bar exam in February.

Tallahassee police have no criminal record of May, but as a Florida State student in 2002, he was investigated for suspicion of marijuana use by FSU police, authorities said. He was not arrested in that incident.

"We're just all astounded. We had no idea that he would do something like this," Taunton said. "Obviously, he was not in his right mind."

She said she had known him since he was about 13 or 14 and that he ran cross country with her kids and stayed at her house a lot. She said he lived with his grandmother after coming out of a "bad situation" with his parents.

"He was a well-liked, real smart. He was having some financial issues and moved back home and decided he'd come back to Florida to work," she said. "My heart's broken. In a million years I wouldn't have thought he'd do something like this. He was struggling, having decided that what he was doing out there was not good. He had some issues and just decided he'd come home. He was struggling, like we all do, financially and otherwise."

The shooting happened about 12:30 a.m., sending hundreds of students who had been up all night studying for exams scrambling for cover in the book aisles and barricading themselves in with desks. Two students and an university employee were wounded before police killed the gunman in a shootout, authorities said.

Police and FSU officials called the shooting an "isolated incident," but have not released many details, including how far May made it into Strozier Library. FSU's compact campus is located less than a mile from downtown Tallahassee and the state Capitol.

"This person just for whatever reason produced a handgun and then began shooting students in the library," FSU Police Chief David Perry said.

Students inside the multistory library heard about half a dozen gunshots. Students began screaming that someone was shooting at them and flipped over chairs in their race to take cover.

"I ran for my life," said Allison Kope, a freshman from Cocoa Beach, who was on the library's first floor. "I ran right out the backdoor. My laptop and everything is still in there. It was shock. It was just instinct. You don't think about anything else, you just go."

Other students hid in the book aisles and some barricaded themselves in rooms.

Sarah Evans, a senior from Miami, said she was inside the library and heard a male student say he had been shot. When she looked at him, he was on the ground with blood spreading on his pants leg.

"No one really moved," student Dominique Gamez told CBS News. "It wasn't until the guy was on the floor and he had his hand on his leg and right there everyone just started running ... I wish I would have stayed with the guy and kind of asked him about it, but at the time everything's happening so fast."

"Everyone, including myself, is just taken back by it," student Matthew Paskert told CBS News. "... You hear about it happening, but you never expect it to happen to you or to people you know."

A local hospital, Tallahassee Memorial HealthCare, told CBS News at least two victims were brought there. The hospital said one victim was in critical condition and the other had improved from stable to good condition.

FSU officials said a third student was only grazed by a bullet and was treated at the scene and released.

Tallahassee and Florida State University police confronted the gunman just outside the library that sits in the middle of the campus and ordered him to drop his handgun, but he fired a shot at them and they unleashed a volley of shots, Tallahassee Police spokesman Dave Northway said.

Hours after the shooting, detectives could be seen inspecting the body of May, who was lying face down at the top of an access ramp just outside the library. A baseball cap lay nearby.

The shooting prompted a campus alert that urged students to take shelter and stay away from doors and windows. After the shooting, FSU officials announced classes would be canceled for Thursday.

Daniel Morales, a 19-year-old freshman from Fort Pierce who was in the library during the attack, said that when he first heard someone say "somebody's got a gun. I thought he was joking." But after realizing there was a gunman in the library, Morales and others raced to a back room on the second floor where they barricaded a door with desks.

Freshman Nikolai Hernandez said he was in his dorm room across from the library when he heard five or six rapid gunshots.

Florida State President John Thrasher, who took office earlier this month, said by phone that he was in New York City at the time of the shooting. He said he was scheduled to return to Tallahassee later Thursday.