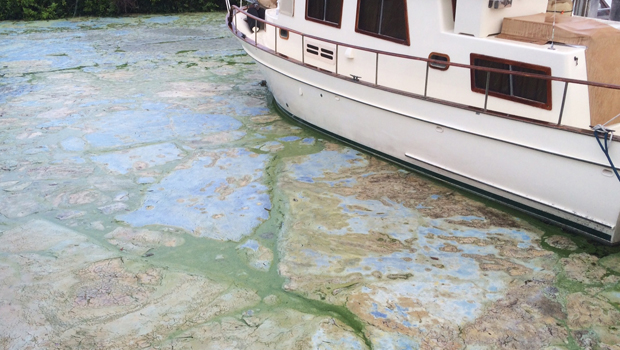 Scott announced Wednesday that he'll ask the Legislature to create a local/state grant program to aid homeowners who want to switch from septic tanks to central sewer systems. He's also proposing setting aside money in 2017 to help communities around the Indian River Lagoon and Caloosahatchee River build new wastewater systems.

Part of the blame for the bloom has been placed on discharges from Lake Okeechobee, but Scott says septic tank runoff also contributes to the problem.

Among the algae blooms some cities and counties have dealt with is one that put a smelly "guacamole-thick" muck on a stretch of beaches promoted as Florida's "Treasure Coast."

Lake Okeechobee is the largest freshwater body in the state, but is polluted with runoff containing human waste, animal feed and fertilizer -- all nutrients that algae thrive on. To manage flooding, the U.S. Army Corps of Engineers releases the lake's water into surrounding rivers and lagoons.

"We just are putting way too much nitrogen and phosphorus into our natural waters, and they respond," said Bill Louda, a research professor at Florida Atlantic University.

Florida Sen. Marco Rubio saw how badly the water responded on Friday and described the situation as a catastrophe of epic proportions. He is calling for an emergency declaration from Washington.

"To allow emergency funds to assist the businesses that have been wiped out by this, have the healthcare agencies come down here and look at the long term impact of this bacteria that's now present," Rubio said.

Louda said there's no quick fix for the problem, at least not one without a disastrous domino effect.

"If you kill this algae, you're going to kill the sea grass, the macro algae, all the good phytoplankton that the fish need, everything else," he said.

The algae also moves quickly, shifting with the winds and the tides, making it difficult to predict where it might show up next. The final total of how much local businesses have lost has yet to be determined, but talking to people here, it has been devastating. It could take weeks for this algae to wash away.