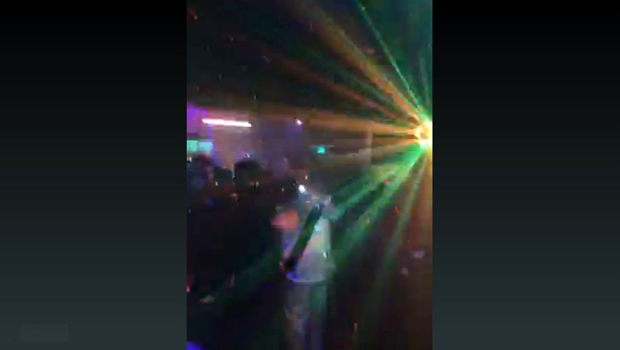 A video posted to social media that appears to capture the first sounds of gunfire at a Florida strip club was part of the investigation into the deadly shooting, police said Saturday.

The video shows three dancers standing on stage around a crowd. Moments after one of the dancers walks over to the man streaming the scene and speaks into the camera, several pops can be heard, and the video ends.

Marvin Douglass Lancaster III, 21, of Brandon, Florida, was killed in the shooting, according to Lt. John Preyer of the Tampa police. Seven other people were injured.

Crime Stoppers of Tampa Bay said it was offering a reward of up to $3,000 for information leading to the identification and arrest of the person -- or people -- who fired the shots.

Police spokesman Stephen Hegarty said in a news release that the shots were fired at Club Rayne, located just north of the Tampa's downtown, shortly after 2 a.m. The club with the bright purple exterior was described in online reviews by patrons as having "beautiful women and great music."

The injured ranged in age from 17 to 32, and six were being treated at Tampa-area hospitals. Three were women. Hegarty said the injuries range from "minor to very serious" and all suffered from gunshot wounds.

It's unknown how many people were inside the establishment at the time of the shooting.

Officials said they were investigating the motive for the shooting.

Reached by phone at the club, owner Roberto Mederos declined to comment. It's unclear when the club might reopen.