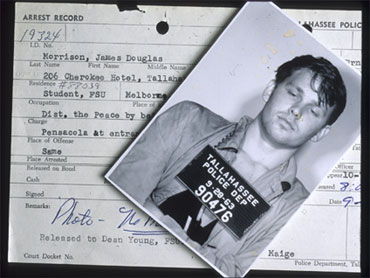 Florida's Clemency Board has posthumously pardoned singer Jim Morrison of The Doors for his 40-year-old conviction on indecent exposure and profanity charges.

A woman who said she was married to The Doors singer Jim Morrison said Thursday that Florida's intention to pardon him for a 1969 indecent exposure conviction is a cheap political ploy.

Patricia Kennealy Morrison told The Associated Press she's not pleased with the pardon and doesn't think the late singer would be either because he didn't expose himself on stage as some claim. The conviction should be expunged or the verdict overturned as fraud rather than just pardoned, she said.

"I have a real problem with the semantics of a pardon. The pardon says that all his suffering and all that he went through during the trial, everything both of us went through, was negated," she said.

Morrison was appealing the conviction when he was found dead in a Paris bathtub in 1971. The expected pardon comes a day after the singer would have turned 67.

The surviving members of The Doors support the pardon.

Asked about expunging Morrison's record or overturning the conviction, Crist said, "The option before us is the pardon or not."

Kennealy Morrison exchanged vows with Morrison in a Celtic pagan ceremony overseen by a licensed minister, she said. The marriage was valid, though she says she never filed the paperwork to put it in the books. Morrison left his entire estate to another woman, Pamela Courson, a longtime girlfriend who was with him in Paris when he died. Courson died in 1974.

Kennealy Morrison said the conviction led to Morrison's and The Doors' demise.

"He cared about it. It affected him deeply. In fact I think it was one of the contributory causes of his death, actually. It certainly destroyed The Doors, pretty much. They didn't perform so much as a group after Miami, after the verdict came through," she said.

The did-he-or-didn't-he debate over what happened at the Miami concert was revived by Crist's interest in the case.

The surviving band members say a drunken Morrison teased the crowd, but never exposed himself.

Manzarek and guitarist Robby Krieger said Morrison's behavior was influenced by an acting troupe that disrobed during plays.

"He was just doing a mind trip - as they would say - a mind trip on the audience and they totally fell for it," Manzarek said.

Manzarek said Morrison was far drunker than usual, to the point where they questioned whether he should go on stage.

Crist began considering a pardon in 2007 at the urging of a fan. He said he doubts whether Morrison actually exposed himself. Morrison was convicted of public profanity and indecent exposure and sentenced to six months in jail and a $500 fine.

The case has become murkier as years passed. Morrison's defense attorney said recently that the singer received a fair trial with credible witnesses on both sides, and fans who were at the show have differing recollections.

Here's what most people agree on: The Doors went on stage late, the Dinner Key Auditorium was oversold and wasn't air conditioned. Morrison was drunk and stopped in the middle of songs with an anti-authority, profanity-riddled rant.

A live lamb was brought on stage at one point, and Morrison also grabbed a police officer's hat and threw it in the crowd. The singer took off his shirt and fiddled with his belt, and fans poured onto the stage.

"There were 100 photos offered in evidence at the trial, photos of everything - Jim with the lamb, Jim with the hat, on the stage collapsing, riot in the audience. Not one photo of Jim's magnificent member," said Manzarek.

A pardon won't change Morrison's image, but it will right a wrong, Manzarek and Krieger said.

"Jim's legacy is one of Dionysian madness and frenzy and of a chaotic American poet. I don't think that the Miami episode has altered his image one iota," Manzarek said.

Krieger added: "Nobody would like to have that charge hanging over their head even if they are dead. I'm sure his family would be happy to see that go, especially since it never happened."

There are fans who still swear Morrison exposed himself.

"He actually unzipped and pulled his pants down a little bit, enough where you can see everything. I do remember being shocked when that happened, and definitely it happened," said Lee Winer, 56, who now lives north of San Francisco. "I can still picture it like it was yesterday."

Others disagree. Helene Davis of Miami said she was an 18-year-old in the front row of the concert with a friend. She said Morrison teased the crowd by pretending he was going to unzip his pants, but never actually exposed himself.