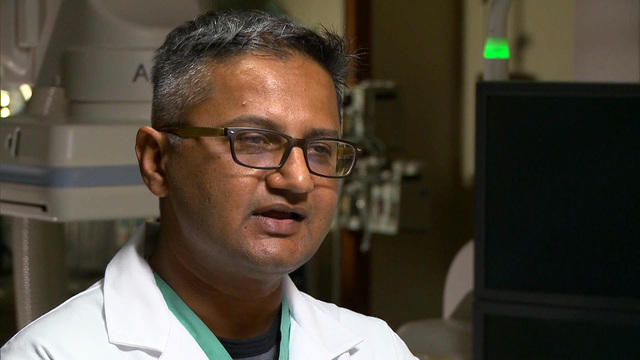 On average, a stroke kills one American every four minutes. Almost two million brain cells die every minute during a stroke, so the odds of survival improve when emergency treatment begins quickly.

At Palmetto General Hospital outside Miami, there’s just one surgeon who operates on all stroke victims. He performs about 100 emergency procedures every year, and he needs to be there whenever the call comes in, no matter what he happens to be doing. And he’s found a new way to rush to the emergency room, reports CBS News correspondent David Begnaud.

Dr. Ritesh Kaushal had to rush out during our interview when he received a call for a stroke patient.

“They just announced it. Can we just try to find out what it is?” Kaushal said as he headed out.

Kaushal often has to drive in to treat stroke victims. Depending on the time of day, his 15-minute commute can easily stretch to 45 minutes.

”Just the amount of damage that can happen in just about half-an-hour delay is spectacular,” the endovascular neurosurgeon said.

But to get quickly to his patients, Kaushal uses emergency lights on his personal car, speeding his arrival to folks like Robert Buslow, whose family dialed 911 when he suddenly had trouble tying his shoes and sweeping the porch.

”How bad was it?” Begnaud asked.

“It was considered a fatal stroke if it wasn’t taken care of,” Buslow said.

The neurosurgeon did take care of it, before Buslow even knew what was happening.

”And he must’ve gotten there very quick because the moment I got in there, I was in the scanners going from one to the other and then all of a sudden, he got it out,” Buslow said.

Just as he did for the patient who arrived when we were there, Kaushal pulled out a tiny blood clot.

“If I did not have the light or if it had taken me another half an hour to get to him, things would’ve been different. Potentially he probably would’ve been paralyzed on the right side and would’ve never been able to speak,” Kaushal said.

“The reason I have absolutely no ill effects is because, you know, Dr. Kaushal got there very, very quick,” Buslow said.

We mounted a camera inside of his car to see how it works. He has no sirens and sometimes he honks his horn. But it’s the lights that allow him to drive on the shoulder of the highway around traffic backups.

The fire department installed them after checking to make sure it was legal.

“Right. So he has to stop at the red lights, go the speed limit. He can just sort of move through the back-up on the freeway,” Begnaud said.

“And as people see the vehicle coming, they usually yield,” Anchia said.

“It does have risks. There are accidents that occur, crashes that occur,” said Dr. Douglas Kupas of the National Association of State EMS Officials.

Kupas said EMS medical directors sometimes respond to scenes with lights and sirens on their cars. But he said this is the first he’s heard of a surgeon using emergency lights.

Dr. Kaushal only uses the lights when there’s a jam. He worked 350 days last year and measures success by the minute.

”What we see is that any of these delays, those brain cells really translate to this person being able to walk out this hospital on his own or go to a nursing home and be paralyzed for the rest of his life,” Kaushal said.

Health officials suggest the best way for stroke victims to save time is to recognize the symptoms – things like a drooping face, arm weakness or speech problems – and to get help as soon as possible.

Kaushal said he’s used the lights seven times since having them installed in September. He said final approval came from his wife – on the condition he buys more life insurance.