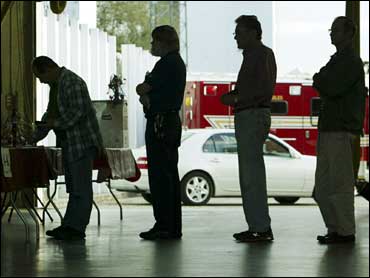 The governors of Michigan and Florida are saying it's increasingly important that delegates from the two states be seated.

Michigan Governor Jennifer Granholm and Florida Governor Charlie Crist say it's "reprehensible" the voices of 5.2 million people who voted in the two primaries would be silenced.

Granholm, along with top officials in Hillary Rodham Clinton's campaign and Florida's state party chair, are now saying they would consider holding a sort of do-over contest by June. That's a change from their previous insistence that the primaries their states held in January should determine how their delegates are allocated.

Clinton won both contests, but the results were meaningless because the elections violated national party rules.

The Democratic National Committee stripped both states of all delegates for holding the primaries too early, and all Democratic candidates - including Clinton and rival Barack Obama - agreed not to campaign in either state. Obama's name wasn't even on the Michigan ballot.

"A do-over could change the whole complexion of this race," Greenfield said.

Crist and Granholm called it "intolerable" Wednesday that the DNC had stripped the states of their delegates for moving up their primaries in violation of DNC rules.

DNC officials have suggested to both Michigan and Florida that holding another presidential contest of some kind would be one way to get the delegates seated. Both states had maintained that holding caucuses would be too expensive.

Florida and Michigan moved up their dates to protest the party's decision to allow Iowa and New Hampshire to go first, followed by South Carolina and Nevada, giving them a disproportionate influence on the presidential selection process.

But no one predicted the race would still be very close at this point in the year.

Ironically, Michigan and Florida could have held crucial primaries had they stayed with their traditional later dates. They may yet do so if they decide to hold new contests as Clinton and Obama compete to the wire.

Clinton has been insisting that the desires of more than 2 million people who cast Democratic ballots in the two states should be reflected at the convention, which would help her catch up to Obama in the race for delegates. Obama has said that he, too, wants the delegates from the two critical swing states to participate, but not if Clinton is rewarded for victories in boycotted primaries.

"Let's let all of the voters go again if they are willing to do it," Clinton adviser Terry McAuliffe said Tuesday night on MSNBC. "Whatever we have to do to get people in the system, let's do it."

The new contests could be part of a strategy for Clinton to come back in the race and attract votes from super delegates who are not bound by any primary or caucus votes, Pennsylvania Gov. Ed Rendell told the network. "Let's assume for the moment Hillary Clinton wins Ohio and Texas, she wins Pennsylvania, Florida and Michigan have primaries in June, she wins both of those," said Rendell, who has endorsed Clinton. "Then, can the super delegates look at that and say, `Gosh, she's won the last five big primaries in a row. She's won almost every big primary since we began.'"

Granholm, a Clinton supporter, told the Detroit Free Press that Clinton's victory in Ohio changes "the landscape a bit." She said it could open the door to a caucus, if it can be privately funded and both candidates agree.