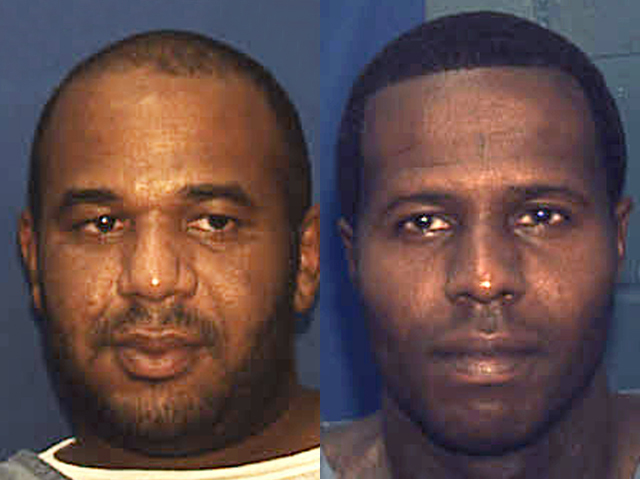 TALLAHASSEE, Fla. Authorities announced Saturday that they have captured the two Florida prisoners who were released by phony documents.

Joseph Jenkins and Charles Walker were taken into custody together at a motel in Panama City, the Florida Department of Law Enforcement said in a statement

Other details were not immediately released.

A woman who answered the phone at the motel said she saw police coming and they went into room 227. The woman, who didn't want to give her name, said authorities didn't stop by the office before they moved in.

Jenkins was found guilty of first-degree murder in the 1998 killing and botched robbery of Roscoe Pugh, an Orlando man. It was Pugh's family that contacted the prosecutor's office earlier this week and told them Jenkins had been released, setting off a manhunt.

The prosecutor's office also discovered Walker had been mistakenly released. Walker was convicted of second-degree murder in the 1999 Orange County slaying of 23-year-old Cedric Slater.

Jenkins and Walker were both serving life sentences at the Franklin Correctional Facility in the Panhandle.

The men were mistakenly released within the last month. Jenkins was released Sept. 27 and registered at the Orange County jail in Orlando on Sept. 30. Walker was set free Oct. 8 and registered there three days later.

Felons are required to register by law. When they do, their fingerprints are digitally uploaded to the Florida Department of Law Enforcement, and a deputy at the jail verifies that they don't have any outstanding warrants, said jail spokesman Allen Moore.

By registering as the law required, they likely drew less attention.

"If there's no hit that comes back, they're free to go," said Isaiah Dennard, the Florida Sheriff's Association's jail services coordinator.

Henry Pearson, who is Jenkins' uncle and his father figure, said he brought Jenkins clothes when he picked him up from prison last month and drove him to see his mother and grandmother.

Pearson planned a birthday party at his home for Jenkins a few days later, but he never showed up. Pearson said he was completely shocked to learn Wednesday that Jenkins was not supposed to be out of prison.

He learned Jenkins was captured on TV and then a law enforcement agent called his home unexpectedly and let Jenkins talk to his wife.

"He just said that he was OK and that he loved us," Pearson said. "We have a great sense of relief because we did not know how this would end up."

Walker's mother, Lillie Danzy, said the family thought their prayers had been answered when she got a call saying Walker was being released. There wasn't time to pick him up, so he hopped a bus to central Florida.

Walker was at church last Sunday. His mother said they have been cooperating with authorities and made no attempts to hide him.

Before their capture, family members pleaded with the men to turn themselves in.

"We love you. We believe in you. We just want you to surrender yourself to someone you trust who will bring you back here safely. We don't want any harm to come to you," Danzy said.

Authorities learned about the mistaken release when one of the murder victim's families notified the state attorney's office. Dennard said victims' families are automatically notified when a felon is released, typically by a computer voice-generated phone call.

It's not clear exactly who made the fake documents ordering the release or whether the escapes were related. Authorities said the paperwork in both cases was filed in the last couple of months and included forged signatures from the same prosecutor's office and judge. Both orders also called for 15-year sentences.

CBS News senior correspondent John Miller reported on "CBS This Morning: Saturday" that a similar order for Jenkins' release was filed in 2011.

"They've been creating these documents and sticking them in the files and hoping somebody would come across them and say, 'Hey, we've got to let this guy out,' for a while," Miller said.

Chief Circuit Judge Belvin Perry, whose signatures were forged, presided over the highly publicized trial of Casey Anthony in 2011. His signature is widely available on public documents and easily accessible online.

"I think it was lifted off another document and placed on that document, which is not hard to do," he told CBS News this week.

Perry said there were several red flags that should have attracted the attention, including that it's uncommon for a request for sentence reduction to come from prosecutors.

The Corrections Department said on Friday it verified the early release by checking the Orange County Clerk of Court's website and calling them.

Sen. Greg Evers, who chairs the Senate Criminal Justice Committee, said he spoke to Perry on Friday and that the judge will offer a proposal in which judges review all early release documents before court clerks send them to prisons.

"They're working on some failsafe plans," said Evers, a Pensacola Republican. "If the court administrator put these plans in place throughout the state it will solve the problem."