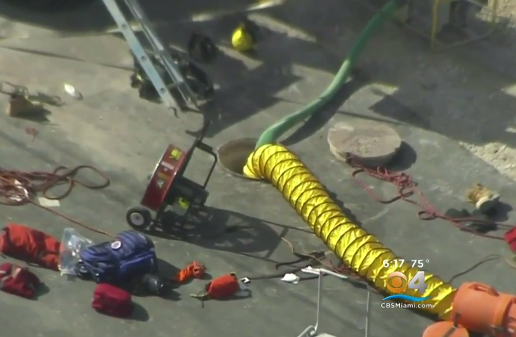 KEY LARGO, Fla. -- Authorities are investigating the deaths of three men who collapsed underground at a Florida Keys road project.

Monroe County spokeswoman Cammy Clark says one worker for the county’s contractor went down a drainage pipe Monday to investigate why a newly paved Key Largo road was settling nearby.

Clark says the worker got trapped. Three other workers, a firefighter and two deputies tried to help him.

Monroe County Sheriff Rick Ramsay said the men were overwhelmed by a combination of methane and hydrogen sulfide gas coming out of the 15-foot deep hole.  It’s something he said is concerning since manholes such as that one should be properly ventilated and it appeared it had ventilation problems. The levels of oxygen in the manhole were not enough to sustain life.

“Generally, you want to ventilate the tube out before you go in there and have proper breathing stuff. It appears there was no venting done prior. The best we can see at this time, there was no pre-venting going in and obviously going into a contained space like this where there’s no gasses, it can be deadly as we saw today,” said Ramsay.

Herrin said all three workers’ bodies have been pulled from the hole. The dead were identified as 34-year-old Elway Gray of Fort Lauderdale, 49-year-old Louis O’Keefe of Little Torch Key and 24-year-old Robert Wilson of Summerland Key.

A Miami-Dade County Hazmat team and the U.S. Occupational Safety and Health Administration also are investigating.