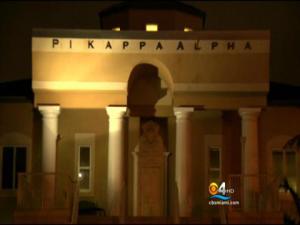 An anonymous e-mail recently sent to local media and members of the FIU community included screenshots of Facebook posts that appeared to show fraternity members discussing the hazing of new members, which is prohibited by university policy. The Miami Herald reports that posts also refer to drug use and make offers to sell drugs. Several posts were of half-nude women who had apparently dated fraternity members, reports the paper.

CBS Miami reports the fraternity members are accused of using the social media site to distribute marijuana cookies and prescription pills like Adderall. The station also says that some of the nude photos posted were of underage women.

FIU said in a statement Wednesday that it is investigating possible violations of the university's code of student conduct. The investigation includes the police.

The Pi Kappa Alpha fraternity's national headquarters in Tennessee says the FIU chapter would fully comply with the temporary suspension and subsequent investigation.

Members of the fraternity on the FIU campus had no comment Wednesday night, the station reports.

The incident is not the first time the fraternity has been in trouble on a South Florida campus, according to CBS Miami. Similar allegations forced the chapter at the University of Miami to suspend its operations and won't be fully reinstated there until the spring of 2014.