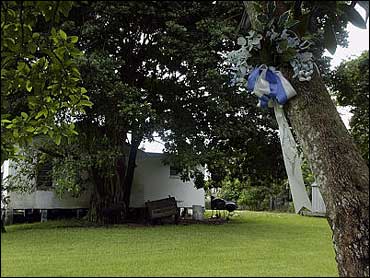 Civil rights leaders accused the state of Florida of using an inquest into the hanging of a black man only to prove that he committed suicide, and of inadequately probing concerns that his death may have been a lynching.

Relatives of Ray Golden also refuse to accept the police conclusion that the man committed suicide, reports CBS News Correspondent Michael Hibblen, and want an investigation into the possibility that he was hanged from a tree as part of a lynching.

The inquest Monday revealed that the bed sheet 32-year-old Feraris "Ray" Golden used as a noose came from his own house. His stepfather said the evidence suggests the death was a suicide.

But Adora Obi Nweze, the NAACP state president, said the state has refused to consider the possibility of murder.

"Today the issue was: 'A suicide was committed. Period,'" she said.

There are rumors in the small farming community of Belle Glade that Golden was killed for dating the daughter of a white police officer, reports Hibblen.

Circuit Judge Harold Cohen convened the rare coroner's inquest into Golden's death to try to determine whether he committed suicide, as police said, or was lynched.

After a day of testimony, Cohen recessed the hearing until Tuesday afternoon. He could rule as early as next week whether it was a suicide or a suspicious death and could direct a law enforcement agency to act on his findings.

Friends said Golden was dating the daughter of a white policeman in this rural farming community of about 15,000.

He was found hanging from a schefflera tree outside his grandmother's house around 7 a.m. on May 28. Some relatives initially said it was impossible he'd committed suicide; they had claimed Golden was found with his hands tied behind his back.

Uneasiness over Golden's death became so strong that local NAACP leaders called for the inquest.

"The only evidence of bruising was really the abrasions surrounding the neck," said Associate Medical Examiner Christopher Wilson, explaining why he was certain Golden committed suicide.

If this were a lynching, he said other injuries would have been apparent.

NAACP leaders questioned why Golden had little or no soil on his shoes after walking across a lawn on a rainy night, and how he was able to climb the tree with a blood-alcohol level of 0.334 percent.

Cohen questioned the chief investigator about rumors that Golden had been lynched and was dating the police officer's white daughter.

Belle Glade Police Detective Steve Sawyers said investigators did not look into the rumors because they felt they had no validity, prompting questions from those watching the proceedings.

One written question handed to the judge read: "Did you not investigate the rumor because you did not think it would get this much attention?"

During the inquest, family attorney Thomas Montgomery told the judge that Golden's aunt, Shresee Lumpkin, recognized the bed sheet used in the hanging and realized it probably was taken from the house.

"That means he got it out of his room and used it," Golden's stepfather, Henry Drummer, told reporters during a break. He added that suicide was "possible."

The inquest started with Cohen and the packed courtroom listening to a tape-recorded 911 call placed by Drummer and watching a police videotape showing officers running to Golden and removing him from the tree.

The video showed that his hands were hanging loose at his sides and were not tied.

Throughout the hearing, the courtroom was split almost entirely by race, underscoring the racial divide still present in Belle Glade. White police officers, witnesses and community members sat on one side while black members of Golden's family, the community and the NAACP sat on the other.

Lynchings reached their peak in the United States from the end of the Civil War until 1902, numbering more than 100 each year, according to the Southern Poverty Law Center. No lynching deaths have been documented for more than two decades, according to the center.