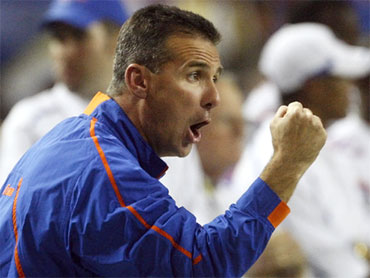 Florida coach Urban Meyer changed his mind Sunday and said he was taking an indefinite leave of absence instead of resigning. Despite ongoing concerns with his health, he expects to be on the sideline leading the Gators when next season opens.

"I do in my gut believe that will happen," Meyer said at a Sugar Bowl news conference.

Offensive coordinator Steve Addazio will run the team during Meyer's absence, but Meyer will be the coach against No. 4 Cincinnati on New Year's Day.

"It's full speed ahead. We're going to do everything possible to win this game," he said.

Less than 24 hours after resigning because of health concerns, Meyer changed direction. He said he was encouraged to take a leave of absence earlier in the week by the university president. Sunday, after conferring with athletic director Jeremy Foley and his family he "accepted the offer to improve my health."

The 45-year-old Meyer said being with his players at a "spirited practice" Sunday morning persuaded him not to resign.

"To not try would not be the right thing to do," he said.

On Saturday night, Meyer shocked college football when he said he was stepping down after five seasons as Gators coach.

After the Southeastern Conference championship game three weeks ago, Meyer spent several hours in a Gainesville, Fla., hospital because of chest pains.

Meyer said Sunday he had experienced similar problems at times this season but had not had a heart attack. However, he would not elaborate on his physical condition. When asked if doctors advised him to stop coaching, Meyer again declined to answer.

Foley said when he went to sleep Saturday night he did not think there was any chance Meyer would change his mind.

"It was a long night for everybody in Gator nation," Foley said. "The intent here is to make sure Urban goes and deals with the issues we discussed last night."

Gators quarterback Tim Tebow said he and several of his teammates cried when they found out that Meyer was stepping down on Saturday and were elated when he told them he changed his mind.

"We want him to do what's best for him," Tebow said. "We want him to get himself right, and when he's right then come back to coaching, then get back into ball."

Tebow will be playing his last game in the Sugar Bowl against an unbeaten Cincinnati team that will be led by an interim coach. Brian Kelly left the Bearcats earlier this month to take over at Notre Dame.

It sounds as if Florida won't have to worry about playing games with an interim coach any time soon.

Meyer is 56-10 with Florida, including 32-8 in the SEC and a school-record 22-game winning streak that was snapped by the Crimson Tide in the conference title game on Dec. 5.

Last month, Sports Illustrated chronicled Meyer's coaching career and reported that he suffered from persistent headaches caused by a cyst that becomes inflamed by stress, rage and excitement.

Meyer told the magazine that since the diagnosis in the early 2000s he has tried to stay composed during games.

A tireless recruiter and creative motivator, Meyer came to Florida from Utah in fall 2004 amid speculation he would end up at Notre Dame.

Meyer brought most of his staff with him — some of whom worked with him at Bowling Green (2001-02) and Utah (2003-04). Together, they restored the program to national prominence two years later with the school's second national championship.

The Gators upset Ohio State 41-14 in Glendale, Ariz.; they won another one last January by beating Oklahoma 24-14 in Miami.

With just about his entire team returning this fall, Meyer spent all season coaching under intense pressure and sky-high expectations. He said he welcomed it all as the defending national champions tried to become just the second team in the last 14 years to repeat.

But the season was far from smooth. Florida dealt with distraction after distraction, prompting Meyer to call it "the year of stuff."