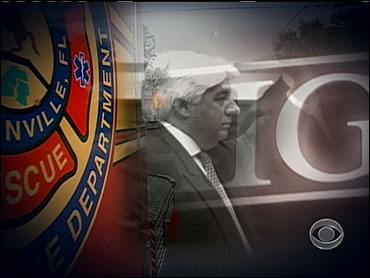 Police and firemen in Jacksonville, Florida, say their pension fund took a $3 million hit based on what they charge was securities fraud by high ranking executives at AIG, reports CBS News chief investigative correspondent Armen Keteyian.

"They're corporate criminals and boardroom bandits," John Keane, executive director of the Jacksonville Fire and Pension Fund told CBS News, "It was a financial house of cards in a windstorm."

The Jacksonville Police and Fire Pension Fund is part of a massive class action lawsuit against the one-time insurance giant. The complaint accuses the company of losing tens of billions of dollars and involves more than 700,000 state and government employees and investors across the country.

The lawsuit claims that former AIG CEO Martin Sullivan, and ex-Chief Financial Officer Steven Bensinger, among others, conducted a "campaign to obscure the true risks facing the company" in part, by denying any problems with AIG securities tied to subprime loans.

Jacksonville District Fire Chief Randy Wyse says, "Our members surely want [AIG executives] to be held accountable if there was any wrongdoing."

CBS News has learned that officials at Pricewaterhouse Coopers-AIG's independent auditor-are cooperating with Justice Department and S.E.C investigations into AIG.

Sources say auditors at PwC have told federal prosecutors that they were repeatedly denied access to key information and employees by senior AIG executives.

The auditors say it wasn't until the first week of November 2007-after weeks of stonewalling-that AIG officials revealed that six investment banks were demanding at least $3 billion to cover potential losses tied to risky mortgages.

In a conference call with investors on December 5, 2007, then CEO Sullivan downplayed any problems with AIG's portfolio, "The probability that it will sustain an economic loss is close to zero."

Documents show that Bensinger earned more than $20 million as CFO and could receive $10 million more in severance money. Meanwhile, the men and women hired to protect Jacksonville have seen 70 years worth of their pension money go up in smoke.