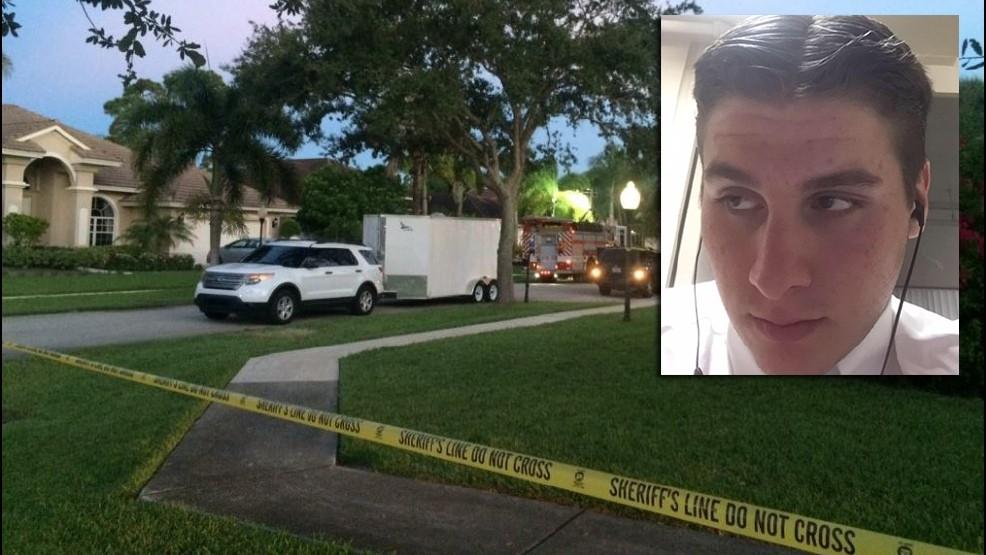 TEQUESTA, Fla. -- A Good Samaritan neighbor is heard in recently-released 911 audio breathlessly pleading with dispatchers for help after he tried to intervene in a student’s apparently random, possibly drug-fueled stabbing attack on a Florida couple.

19-year-old Austin Harrouff, a fraternity brother who attends Florida State University, is accused in the Monday night attack in a quiet neighborhood north of Jupiter that left 53-year-old Michelle Mishcon and John Stevens III 59, dead. It took three to four deputies – one of whom used a Taser – and a K-9 to subdue the “abnormally strong” teen, who authorities say was found biting off pieces of the male victim’s face.

Neighbor Jeff Fisher, 47, tried to help but was stabbed during the attack. He was breathing heavily on the 911 call, which was released Tuesday. He told the operator that the assailant had attacked a woman in a garage across the street, before turning on Fisher when he tried to intervene.

“There’s a girl laying on the ground – he beat her up,” Fisher is heard saying on the call. “I ran over there – I’m bleeding profusely at the moment – I don’t know what happened. I got stabbed.”

Fisher tells the dispatcher it doesn’t appear the woman is conscious and that he believes the assailant is still in the garage. When asked, Fisher says he has “no idea” who the attacker is.

“I’ve been stabbed in the back,” Fisher is heard saying. “I need an EMT, quick, please.”

Fisher tells the dispatcher he didn’t see a knife, but he believes he’s suffering from stab wounds. His wife is heard saying, “Bad.”

“In the neck, in the head – three puncture wounds,” the woman says.

In an interview with CBS affiliate WPEC, Fisher’s father says his son suffered five apparent stab wounds to the head and neck -- one “pretty close to the jugular” -- but is expected to recover.

“He was trying to break up the fight – the guy turned on him,” the man says. “Thank God Jeff had enough sense to get back in the house.”

Martin County Sheriff William Snyder said Austin Harrouff may have been under the influence of Flakka, a designer drug often associated with bizarre and uncontrollable behavior that has been associated with a string of violent incidents in recent years. Drug tests are still pending, however.

Snyder said Harrouff attacked the couple after storming off from a dinner out with his parents, apparently agitated over the restaurant service. Both victims sustained massive trauma including blunt force injuries, stab wounds and slicing wounds, Snyder said.

Snyder said Harrouff was incoherent and making “animal-like noises” when he was taken to St. Mary’s Medical Center after the attack.

On Tuesday, Snyder told reporters that Harrouff’s condition was “life-threatening.” West Palm Beach television station WPTV reported Wednesday that Harrouff was sedated and on a ventilator with guards stationed nearby.

On Wednesday, however, the teen was reported to be in stable condition. Martin County sheriff’s spokeswoman Trisha Kukuvka said in a text message that Harrouff is scheduled to undergo hand surgery later Wednesday.

Attorney Michelle Suskauer told WPTV she’ll be representing Harrouff if he survives. She told the television station that his parents have not been able to see him, but she’s continuing to request permission for them to be by his side.

“Obviously we don’t know what predicated these acts. But certainly, there are mental health issues that are going to have to be investigated here. We don’t know if anything is going to show up on toxicology or not,” Suskauer said.