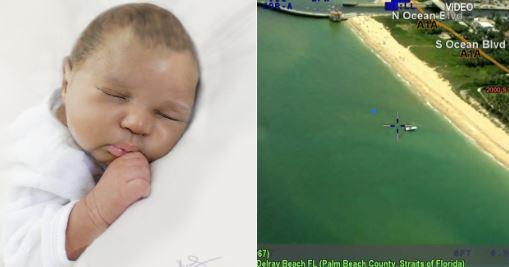 BOYNTON BEACH, Fla. -- Authorities are seeking the public's help to identify a newborn found dead on Friday in the ocean near the Florida coast. A Palm Beach County Sheriff's Office news release says an off-duty firefighter found the female infant Friday afternoon while boating on the Atlantic Ocean side of the Boynton Beach Inlet around 1 p.m. June 1.

Detectives didn't immediately know the baby's nationality or how long she had been in the water. The county's medical examiner will perform an autopsy to determine a cause of death and possible identification.

Sheriff's officials released an artist's rendition of how the child would have appeared in life and asked the child's family or anyone with information to come forward.

"A big piece of what we need right now is the parents," Palm Beach County Sheriff's Capt. Steven Strivelli said at a press conference Monday.

The sheriff's office says the infant was less than two weeks old. It's not clear how she died, or whether she drowned or had died earlier and was placed in the water.

The child wasn't wearing clothes when the remains were recovered about 75-100 feet off of the shoreline, Strivelli said.

"It's gut-wrenching, and we hate seeing it, and we really desperately want to get to the bottom of what happened," Strivelli said.

Older Americans scammed out of $1.7 billion in 2021, FBI says
Thanks for reading CBS NEWS.
Create your free account or log in
for more features.
View CBS News In
CBS News App Open
Chrome Safari Continue
Be the first to know
Get browser notifications for breaking news, live events, and exclusive reporting.