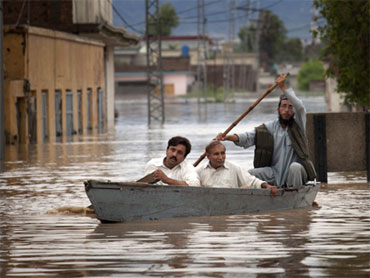 The death toll from three days of flooding in Pakistan reached at least 430 on Friday, as rains bloated rivers, submerged villages, and triggered landslides.

Pakistani TV showed striking images of people clinging to fences and other stationary items as water gushed over their heads. Helicopters were also shown winching people to safety.

The rising toll from the monsoon rains underscores the poor infrastructure in impoverished Pakistan, where under-equipped rescue workers struggled to reach people stranded in far-flung villages. The weather forecast was mixed, with some areas expected to see reduced rainfall and others likely to see an intensification.

The northwest was the hardest hit and Mian Iftikhar Hussain, the information minister for the region, said it was the deadliest and most destructive flooding there since 1929 when 408 people died.

The highway connecting Peshawar to the federal capital, Islamabad, was shut down. At least 60 bridges were destroyed, Hussain said.

The floods cap a deadly week in Pakistan. On Wednesday, a passenger jet slammed into hills close to Islamabad killing all 152 people on board.

In the Swat Valley, residents were forced to trudge through knee-deep water in some streets.

A newly constructed part of a dam in the Charsadda district collapsed, while the U.N. said it had reports 5,000 homes were underwater in that area. Hussain estimated 400,000 people were stranded in various northwest villages.

"A rescue operation using helicopters cannot be conducted due to the bad weather, while there are only 48 rescue boats available for rescue," he said Thursday.

Pakistan's poorest residents are often the ones living in flood-prone areas because they can't afford safer land.

Southwest Baluchistan province has also been hit hard by recent rains. Last week flash floods in that region killed at least 41 people and swept away thousands of homes. The U.N. statement Thursday said 150,000 people were affected there.

The U.N. said Punjab province in Pakistan's east was also hit by flooding. Crops were soaked in farmlands throughout the country. The U.N. said the humanitarian community was trying to put together a proper response, but the rains were making many roads impassable, complicating efforts to assess needs.