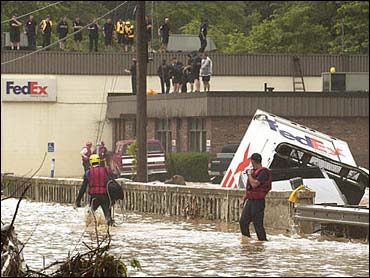 Rescuers had to scrounge for boats Monday as flash flooding forced rural residents out of their homes and blocked the road to the city's airport. Employees at a FedEx depot retreated to the roof as the water rose.

There were no immediate reports of any deaths or injuries as water rushed down creeks and roads in rural areas of Mingo and Kanawha counties west and north of Charleston, and in Nicholas County to the east. In neighboring Kentucky, a 6-year-old girl's death was blamed on flooding.

The several rugged counties in West Virginia got 2 to 3 inches of rain between midnight and noon. The ground was already saturated by heavy rain over the past week.

"We believe we are going to have a long-term, serious series of events. We are absolutely swamped," said Kanawha County Commissioner Kent Carper.

More than 50 homes were badly damaged or destroyed in and around Charleston, and Gov. Bob Wise is seeking a federal disaster declaration for Kanawha County.

Rescue workers had to scrounge for boats to retrieve residents stranded by high water. More than 30 residents were picked up in the community of Pinch, just north of Charleston, said Volunteer Fire Chief Sonny Wagner. "We have high water all around us," he said.

About 60 residents of a nursing home near Charleston were evacuated for the second time in a week.

Monday afternoon, the body of 6-year-old Beverly Yarber was found in Drowning Creek, several miles downstream from where rushing water had pulled her from her grandfather's grasp.

The child had been missing since Saturday, when a car carrying her, her grandfather and mother was pushed off a narrow bridge in Madison County. The two adults escaped to the creek's bank.

Belcher said the airport's conference room became a shelter for several families who had hiked up wooded hillsides in advance of rising water.

Floodwaters swept a nearby halfway house for developmentally disabled people off its foundation and hurled it into a tree. The residents got out in time, taking refuge in a church.

Yvonne Perry, 36, said she and her parents both have homes in the neighborhood. Her parents' home was badly damaged, she said. She didn't know the fate of her own because her street was impassable.

"There's a Jeep in my parents' yard right now that's not theirs," she said.

The same flood that blocked the airport road also swamped a Federal Express depot. At least a dozen workers took refuge on the roof.

A FedEx truck was washed off the airport road bridge. One rescuer had to be rescued himself after the propeller on a boat he was riding in jammed.

In Nicholas County, mudslides and water closed a highway near Drennen, where several houses and a church were flooded by water up to 6 feet deep.

About 5,000 American Electric Power customers in Kanawha County lost electricity, most because of trees falling onto power lines.