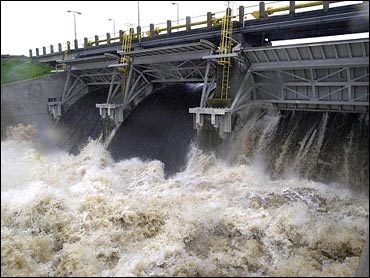 Hundreds of people living downstream from a rain-swollen lake evacuated Sunday after a floodgate jammed on a dam for more than 12 hours. The gate was later repaired and residents returned.

By 10 p.m. Sunday, emergency officials allowed residents to return to their homes near Lake Manatee. Two emergency shelters that had been opened for some 235 displaced Manatee County residents were empty, county spokesman Jay Moyles said. A handful of nearby homes flooded.

Heavy rains since Wednesday forced flood watches in 18 counties and caused at least two other rivers to overflow Sunday.

The malfunctioning flood gate, one of three on the reservoir, caused water to stream into the 2,400-acre lake faster than it could be released. Emergency managers began asking residents living near the lake and downstream along the Manatee River to evacuate on Sunday morning.

At first, workers could only get the floodgate halfway open, which wasn't enough to drain the lake about 40 miles southeast of Tampa. The water pushed close to emergency spillways that have never been used, but it didn't reach the earth-walled channels designed to divert water away from the lake, Manatee County emergency operation spokesman Larry Leinhauser said.

Eventually, divers and crews using a crane and cables managed to pry open the gate. The lake, which had reached 5 feet above normal levels, is now draining steadily, Moyles said.

Residents of the 600 homes were given the "all clear" Sunday night because flooding around the homes wasn't as serious as expected, Moyles said.

It was not known yet exactly how many homes were flooded or how much damage the water caused. Moyles said damage assessments will begin Monday morning.

Manatee County had 1 to 3 inches of rain on Sunday and could have that much on Monday, when there's a 50 percent chance of rain, National Weather Service meteorologist Frank Alsheimer said late Sunday.

"We've been getting hit every day for about a week now," said Eric Oglesby, a National Weather Service hydrologist in Ruskin. "We should dry out on Tuesday."

More than 10 inches had fallen since Wednesday southeast of Tampa. Scattered sections of Manatee and Citrus counties reported up to 20 inches last week.